Amendment to the Collaboration and License Agreement dated April 11, 2019, as amended, between Nanomerics Ltd. and Virpax Pharmaceuticals, Inc., dated April 6, 2021

This Amendment No. 2 (the “Amendment”) to the Collaboration and License Agreement dated April 11th 2019, as amended by the Amendment No 1 dated December 30th 2019 with respect to the PTSD Program, by and between Nanomerics Ltd. (“Nanomerics”) and Virpax Pharmaceuticals, Inc. (“Virpax”) (the “Agreement”), is made effective this day of January 2021 (the “Amendment Effective Date”).

Virpax and Nanomerics are each sometimes referred to herein as a “Party” and, collectively, as the “Parties.”

WHEREAS, the Parties desire to modify certain terms of the Agreement as set forth in this Amendment to better record and clarify their mutual intentions;

WHEREAS, any capitalized term not separately defined in this Amendment shall have the meaning ascribed to it in the Agreement.

NOW, THEREFORE, in consideration of the foregoing premises and the mutual covenants contained herein, the receipt and sufficiency of which are hereby acknowledged, the Parties, intending to be legally bound, hereby agree as follows:

Any capitalized term not separately defined in this Amendment shall have the meaning ascribed to it in the Agreement.

In Article 1 of the Agreement:

Replace the existing definition of “Device” with:

“Naltos Device” means the drug delivery device known under the trademark NALTOSÒ as further specified in Schedule 2 and used by Virpax, its Affiliates or Sublicensees as part of Licensed Product.

“Device” means any drug delivery device other than the Naltos Device.”

In the definition of “Exploit”, insert:

In the definition of “Funding Expiry Date”, replace:

““Indications” means the prophylaxis, diagnosis and treatment of: (a) pain; (b) Post Traumatic Stress Disorder; and (c) such other indications as the Parties may reasonably agree.”

““Product Patents” means those Licensed Patents identified in Schedule 4 hereto as being specific to the Compound or the Device.

“General Patents” means those Licensed Patents other than the Product Patents.”

Replace the existing definition of “Product” with:

““Product” means a product containing Compound as the active ingredient (whether or not incorporating a Device), in finished form for human application by intranasal administration.”

Replace the existing definition of “Funding” with:

Replace the existing definition of “Technology” with:

(a) an exclusive (including with regard to Nanomerics and its Affiliates) right and licence in the Territory, with the right to grant sublicenses pursuant to Section 3.2, under Nanomerics’ and its Affiliates’ rights, titles, and interests in and to the Product Patents, the Licenced Know-How and the Licensed Improvements to:

and (b) a non-exclusive right and licence in the Territory, with the right to grant sublicenses pursuant to Section 3.2, under Nanomerics’ and its Affiliates’ rights, titles, and interests in and to the General Patents and the Technology to Exploit the Licensed Products in accordance with sections 3.1.1 and 3.1.2.”

Replace the existing Section 10.1 with:

Replace the existing Section 10.3 with:

The following is added as a new Schedule 3b:

During calendar years 2021 and 2022, Virpax intends to apply for one or more grants from the NIH or other government or institution-supported grant programs to fund the PTSD Program. In order to constitute “PTSD Funding” for the purposes of this Agreement, the aggregate cash awarded to Virpax from such grants must exceed $1,000,000.

Reorder the Licensed Patents into “Product Patents” and “General Patents” by replacing the existing Schedule 4 with: 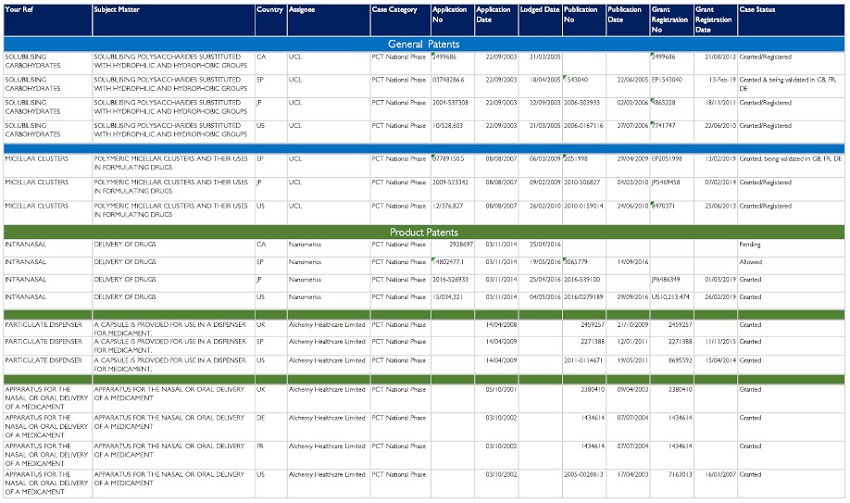 The following is added as a new Schedule 5b:

A development plan for the PTSD Program will be provided by Virpax to Nanomerics when grant applications for PTSD Funding are submitted.

This Amendment shall become effective on the Amendment Effective Date.

This Agreement has been signed by the Parties’ duly authorized signatories. This Agreement may be executed and transmitted via email in Portable Document Format (PDF), and in counterparts, each of which taken together, shall constitute one agreement binding on the Parties with the same force and effect as an original signed agreement.