Fifth Amendment to Lease Agreement, dated May 24, 2020, by and between 21st Century Techbanq Pasadena LLC and Rockley Photonics, Inc

THIS FIFTH AMENDMENT TO LEASE AGREEMENT (this “Amendment”) is made as of May 24, 2020 (“Effective Date”), by and between 21st CENTURY TECHBANQ PASADENA LLC, a California limited liability company (“Landlord”), and ROCKLEY PHOTONICS, INC., a Delaware corporation (“Tenant”).

B. Tenant desires to expand the Current Premises to include that certain space consisting of approximately 809 rentable square feet, located in the space commonly known as Suite 208, and Landlord and Tenant desire to otherwise to amend the Lease as set forth herein.

NOW, THEREFORE, in consideration of the mutual agreements contained in this Amendment, Landlord and Tenant agree as follows:

1. Incorporation of Recitals. The Recitals set forth above are incorporated herein by reference.

Expansion Premises to Tenant on or before December 31, 2020 (the “Outside Delivery Date”), then either Landlord or Tenant shall have the right to terminate this Amendment by giving thirty (30) days written notice thereof to the other party and this Amendment shall have no further force or effect; provided, however, that if Tenant gives notice to terminate the Lease and Landlord obtains legal possession of the Suite 208 Expansion Premises within such thirty (30) day period, then Tenant shall have no right to terminate the Amendment and the Amendment will continue in full force and effect. Landlord and Tenant’s termination right shall be their only remedy if Landlord is unable to obtain legal possession of the Suite 208 Expansion Premises from the existing tenant and Landlord will not be liable to Tenant for any loss or damage resulting from such delay.

9. Parking. Landlord and Tenant acknowledge and agree that as of the Suite 208 Expansion Premises Commencement Date, Tenant shall have the right but not the obligation to lease up to two (2) unreserved parking passes for every 1,000 rentable square feet of the Suite 809 Expansion Premises, for a total two (2) unreserved parking passes. Tenant shall pay the current parking rate for each unreserved parking pass which may be increased by Landlord in its sole discretion. Landlord shall retain sole discretion to designate the location of each parking space, and whether it shall be assigned, or unassigned, unless specifically agreed to otherwise in writing between Landlord and Tenant. All such parking passes shall be subject to the applicable terms of the Lease including but not limited to Article 35 of the Original Lease, as amended by Section 8 of the First Amendment and Section 8 of the Second Amendment, and Exhibit E to the Original Lease.

parties shall mutually agree on the arrangements for the time and manner of the CASp inspection, the payment of the fee for the CASp inspection, and the cost of making any repairs necessary to correct violations of construction-related accessibility standards within the premises.” Any CASp inspection shall be conducted in compliance with reasonable rules in effect at the Project and shall be subject to Landlord’s prior written consent.

13. Brokers. Each party represents and warrants to the other that no broker, agent or finder negotiated or was instrumental in negotiating or consummating this Amendment other than Cushman & Wakefield and Hello Office representing Landlord (the “Broker”). Landlord shall pay any commission owed to Broker pursuant to a separate agreement. Tenant warrants and represents to Landlord that in negotiating or making of this Amendment, neither Tenant nor anyone acting on Tenant’s behalf has dealt with any broker or finder who might be entitled to a fee or commission for this Amendment. Each party shall indemnify and hold the other harmless from any claim or claims including costs, expenses and reasonable attorney’s fees, incurred by the other asserted by any other broker or finder for a fee or commission based upon any dealings with or statements made by such party or such party’s representatives.

14. Ratification: No Further Modification. Except as set forth in this Amendment, all of the terms, covenants, conditions, provisions and agreements of the Lease shall apply with respect to the Suite 208 Expansion Premises, and the Lease shall remain unmodified and in full force and effect. This Amendment shall be construed to be part of the Lease and shall be deemed incorporated into the Lease by this reference.

15. Conflicting Terms. In the event of a conflict between the terms of the Lease and this Amendment, the language of this Amendment shall control.

16. Counterparts. This Amendment may be executed in several counterparts, each of which shall be deemed an original, but all of which together shall constitute one and the same agreement. Landlord and Tenant hereby acknowledge and agree that electronic signatures may be used in connection with the execution of this Lease and electronic signatures or signatures transmitted by electronic mail in so-called .pdf format shall be legal and binding and shall have the same full force and effect as if a paper original of this Lease had been delivered and had been signed using a handwritten signature.

17. Successors and Assigns. Except as specifically modified hereby, all of the .terms, covenants and conditions of the Lease shall remain in full force and effect and shall be binding on the parties hereto, their successors and assigns.

IN WITNESS WHEREOF, this Amendment to Lease is made as of the day and year first above written. 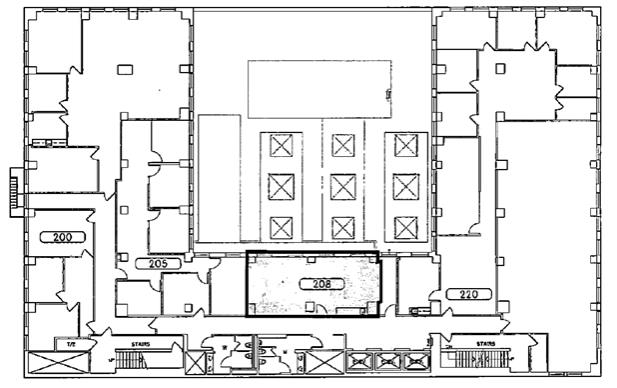 1.2 Construction of the Suite 208 Tenant Improvements.

governmentally-required alterations or improvements can be avoided by modifying the cost, design or manner of construction of the Suite 208 Tenant Improvements, then, subject to Landlord’s prior approval, Tenant may elect to modify the Suite 208 Tenant Improvements in accordance with the provisions of this Construction Rider. Landlord shall notify Tenant of any such required alterations or improvements promptly after Landlord is notified of the same.

1.2.3 Construction. Upon Tenant’s receipt of Approved Construction Documents and Permits, Tenant shall proceed with reasonable diligence to cause the Suite 208 Tenant Improvements to be Substantially Completed as soon as reasonably practicable following the Suite 208 Expansion Premises Delivery Date. Prior to commencement of construction, Tenant shall provide evidence satisfactory to Landlord that Tenant has obtained the insurance required to be maintained by Tenant pursuant to this Lease. Tenant shall provide Landlord with at least ten (10) days’ prior written notice of the date for its commencement of construction of the Suite 208 Tenant Improvements, in order to permit Landlord to post, file, and record such Notices of Nonresponsibility and other instruments as may be necessary to protect Landlord and its property from claims by contractors for construction costs that are to be paid by Tenant. Tenant shall comply with all applicable laws and with all recorded restrictions affecting the property. Upon prior written notice, Landlord shall have the right to suspend any construction activity by Tenant that detracts from harmonious labor relations at the property.

Following Substantial Completion of the Suite 208 Tenant Improvements, Tenant shall inspect the Suite 208 Expansion Premises and prepare a “punch list” of agreed items of construction remaining to be completed. Tenant shall complete the items set forth in the punch list as soon as reasonably possible.

1.2.4 Indemnity: Insurance. Tenant’s indemnity of Landlord as set forth in Article 10 of the Lease shall also apply with respect to any and all costs, losses, damages, injuries and liabilities related in any way to any act or omission of Tenant or Tenant’s Representatives, or anyone directly or indirectly employed by any of them, or in connection with Tenant’s non-payment of any amount arising out of the Suite 208 Tenant Improvements. All of Tenant’s Representatives shall carry worker’s compensation insurance covering all of their respective employees, and shall also carry commercial general liability insurance, including property damage, all with limits, in form and with companies as are required to be carried by Tenant as set forth in Article 11 of the Lease, and the policies therefor shall insure Landlord and Tenant, as their interests may appear, as well as the Contractor and subcontractors. Additionally, Tenant or Contractor shall also carry “Builder’s All Risk” insurance in an amount approved by Landlord, which shall in no event be less than the amount actually carried by Tenant or Contractor, covering the construction of the Suite 208 Tenant Improvements, and such other insurance as Landlord may require, it being understood and agreed that the Suite 208 Tenant Improvements shall be insured by Tenant pursuant to Article 11 of the Lease immediately upon completion thereof. The Tenant’s Representatives, including Contractor, shall deliver insurance certificates to Landlord at least five (5) days prior to commencing construction of the Suite 208 Tenant Improvements. Such insurance shall be in amounts and shall include such extended coverage endorsements as may be reasonably required by Landlord.

1.4 Changes. If Tenant requests any material change, addition or alteration in or to any Approved Construction Documents (“Changes”) Tenant shall (i) inform the Landlord of the desired Changes and obtain Landlord’s written approval thereof which shall be granted or withheld in accordance with the terms of Section 1.1.2 within no more than three (3) business days after the date of Tenant’s request for approval (and if Landlord has not responded within such three (3)-day period, such request for a Change shall be deemed approved); (ii) following Landlord’s approval of Changes, cause the Space Planner to prepare additional plans implementing such Changes; and (iii) promptly pay the cost of preparing additional plans directly to the Space Planner.