THIS AGREEMENT TO SERVE AS INDEPENDENT CORPORATE DIRECTOR (the “Agreement”) is

made and entered into by and between PUGET TECHNOLOGIES, INC., a publicly held Nevada corporation subject to reporting requirements under the Securities Exchange Act of 1934, as amended pursuant to Sections 13 and 15(d) thereof (“Puget” and the “Exchange Act,” respectively); and, the person specifically identified on exhibit 0.1 annexed hereto and made a part hereof (the “Director Nominee”; the Director Nominee and Puget being hereinafter collectively referred to as the “Parties” and generically as a “Party”).

Whereas, the Puget requires the services of highly qualified, experienced, dedicated and ethical persons for service on its board of directors and on the committees thereof, as specified in its articles of incorporation and bylaws; and

Whereas, the Director Nominee has expressed his or her interest in serving as an Independent Member of Puget’s board of directors and on committees thereof which require that a majority of its members be neither officers, employees, of principal shareholders of Puget; and

Whereas, Puget has required, as a condition to nomination for service on its board of directors, that all nominees enter into a form of agreement that delineates the proposed director’s rights, duties and responsibilities; and

Whereas, the Parties agree that this Agreement provides important directives outlining the duties, obligations, responsibilities and rights that are expected by members of Puget’s board of directors and the Director Nominee desires to be elected as a member of Puget’s board of directors and to serve thereon in compliance with the requirements of this Agreement and Puget’s bylaws:

NOW, THEREFORE, intending to be legally bound, the Parties agree that if the Director Nominee is elected as a member of Puget’s board of directors, he or she will be bound by the following obligations and shall have the following rights:

Article One: Definitions & Rules of Construction

As used in this Agreement, the following words, terms and phrases will have the meanings ascribed to them below:

In the event that Puget discontinues operating its business, this Agreement shall terminate as of the last day of the month on which it ceases operation with the same force and effect as if such last day of the month were originally set as the termination date hereof; provided, however, that a reorganization of Puget shall not be deemed a termination of its business.

Upon termination of this Agreement and payment to the Director Nominee of all amounts due him or her hereunder, the Director Nominee or his or her representative shall execute and deliver to the terminating entity on a form prepared by the terminating entity, a receipt for such sums and a release of all claims, except such claims as may have been submitted pursuant to the terms of this Agreement and which remain unpaid, and, shall forthwith tender to Puget all records, manuals and written procedures, as may be desired by it for the continued conduct of its business.

Article Three: Performance of Duties as a Director

Unless he or she is the sole serving member of Puget’s board of directors, the Director Nominee may resign at any time by providing Puget’s board of directors with written notice indicating the Director Nominee’s intention to resign and the effective date thereof.; provided, however, that resignation, whether voluntary or presumptive (as provided above) shall result in a forfeiture of all rights to compensation under this Agreement, other than as to compensation that has accrued pursuant to the provisions of this Agreement.

During the term of this Agreement the Director Nominee will be entitled to a monthly fee, payable in arrears, in Cash Equivalents, of $5,000.

Puget will defend, indemnify and hold the Director Nominee harmless from all liabilities, suits, judgments, fines, penalties or disabilities, including expenses associated directly, therewith (e.g. legal fees, court costs, investigative costs, witness fees, etc.) resulting from any reasonable actions taken by him or her in good faith on behalf of Puget, its affiliates or for other persons or entities at the request of the board of directors of Puget, to the fullest extent legally permitted, and in conjunction therewith, shall assure that all required expenditures are made in a manner making it unnecessary for the Director Nominee to incur any out of pocket expenses; provided, however, that the Director Nominee permits Puget to select and supervise all personnel involved in such defense and that the Director Nominee waives any conflicts of interest that such personnel may have as a result of also representing Puget, their stockholders or other personnel and agrees to hold them harmless from any matters involving such representation, except such as involve fraud or bad faith.

In view of the irreparable harm and damage which would undoubtedly occur to Puget as a result of a breach by the Director Nominee of the covenants or agreements contained in this Article Four, and in view of the lack of an adequate remedy at law to protect Puget’s interests, the Director Nominee hereby covenants and agrees that Puget shall have the following additional rights and remedies in the event of a breach hereof:

The Director Nominee hereby irrevocably agrees that the remedies described in Section 5.3 hereof shall be in addition to, and not in limitation of, any of the rights or remedies to which Puget is or may be entitled to, whether at law or in equity, under or pursuant to this Agreement.

The Director Nominee hereby acknowledges that his or her role as a member of Puget’s board of directors does not confer agency authority with respect to Puget and hereby covenants and agrees that he or she will not do any act or incur any obligation on behalf of Puget of any kind whatsoever, except as authorized by its board of directors or by its stockholders pursuant to duly adopted board or stockholder action.

The Director Nominee hereby irrevocably covenants and agrees that during the term of this Agreement and after its termination, he or she will refrain from making any remarks that could be construed by anyone, under any circumstances, as disparaging, directly or indirectly, specifically, through innuendo or by inference, whether or not true, about Puget, its constituent members, or their officers, directors, stockholders, employees, agent or affiliates, whether related to the business of Puget, to other business or financial matters or to personal matters.

“The securities represented by this certificate were issued without registration under the Securities Act of 1933, as amended, or comparable state laws in reliance on the provisions of Section 4(a)(2) of such act, and comparable state law provisions or they have been held by a person deemed a control person under Commission Rule 144 and subject to reporting obligations under Section 13D of the Exchange Act and to reporting obligations and trading restrictions under Section 16(a) of the Exchange Act. These securities may not be transferred pledged or hypothecated unless they are first registered under applicable federal, state or foreign laws, or the transaction is demonstrated to be exempt from such requirements to the Company’s satisfaction, and, all required reports pertaining thereto, including Commission Forms 3, 4, 5 and 144 and Commission Schedule 13D have been filed with the Commission.”

The Director Nominee will not, and will not permit any entity under his control to:

This Article is intended solely to apply to the exercise by the Director Nominee in his individual capacity of rights attaching to ownership of the Puget securities and nothing herein shall be deemed to apply to, or to limit in any manner the discretion of the Director Nominee with respect to, any action which may be taken or omitted by him or her acting in his fiduciary capacity as a member of Puget’s board of directors or any committee thereof.

All notices, demands or other written communications hereunder shall be in writing, and shall be deemed to have been duly given on the fifth business day after mailing by United States registered or certified mail, return receipt, postage prepaid, or, if provided by immediate electronic communication, on the date so provided, as set forth below:

To the Director Nominee: At the address, email and telephone numbers set forth in exhibit 0.1;

in each case, with copies to such other address or to such other persons as any Party shall designate to the others for such purposes in the manner hereinabove set forth.

No modification, waiver, amendment, discharge or change of this Agreement shall be valid unless the same is in writing and signed by Parties.

The several representations, warranties and covenants of the Parties contained herein shall survive the execution hereof and shall be effective regardless of any investigation that may have been made or may be made by or on behalf of any Party.

This Agreement shall be construed in accordance with the laws of the State of Nevada but any proceeding arising between the Parties in any matter pertaining or related to this Agreement shall, to the extent permitted by law, be held in Palm Beach County, Florida.

The captions in this Agreement are for convenience and reference only and in no way define, describe, extend or limit the scope of this Agreement or the intent of any provisions hereof.

All pronouns and any variations thereof shall be deemed to refer to the masculine, feminine, neuter, sin- gular or plural, as the identity of the Party or Parties, or their personal representatives, successors and assigns may require.

The Parties hereby agree to do, execute, acknowledge and deliver or cause to be done, executed, acknow- ledged or delivered and to perform all such acts and deliver all such deeds, assignments, transfers, con- veyances, powers of attorney, assurances, stock certificates and other documents, as may, from time to time, be required herein to effect the intent and purpose of this Agreement.

The Director Nominee has full power and authority to execute this Agreement, to make the representations, warranties and covenants herein contained and to perform the Director Nominee- Nominee’s obligations hereunder.

IN WITNESS WHEREOF, the Parties have executed this Agreement, effective as of the last date set forth below. 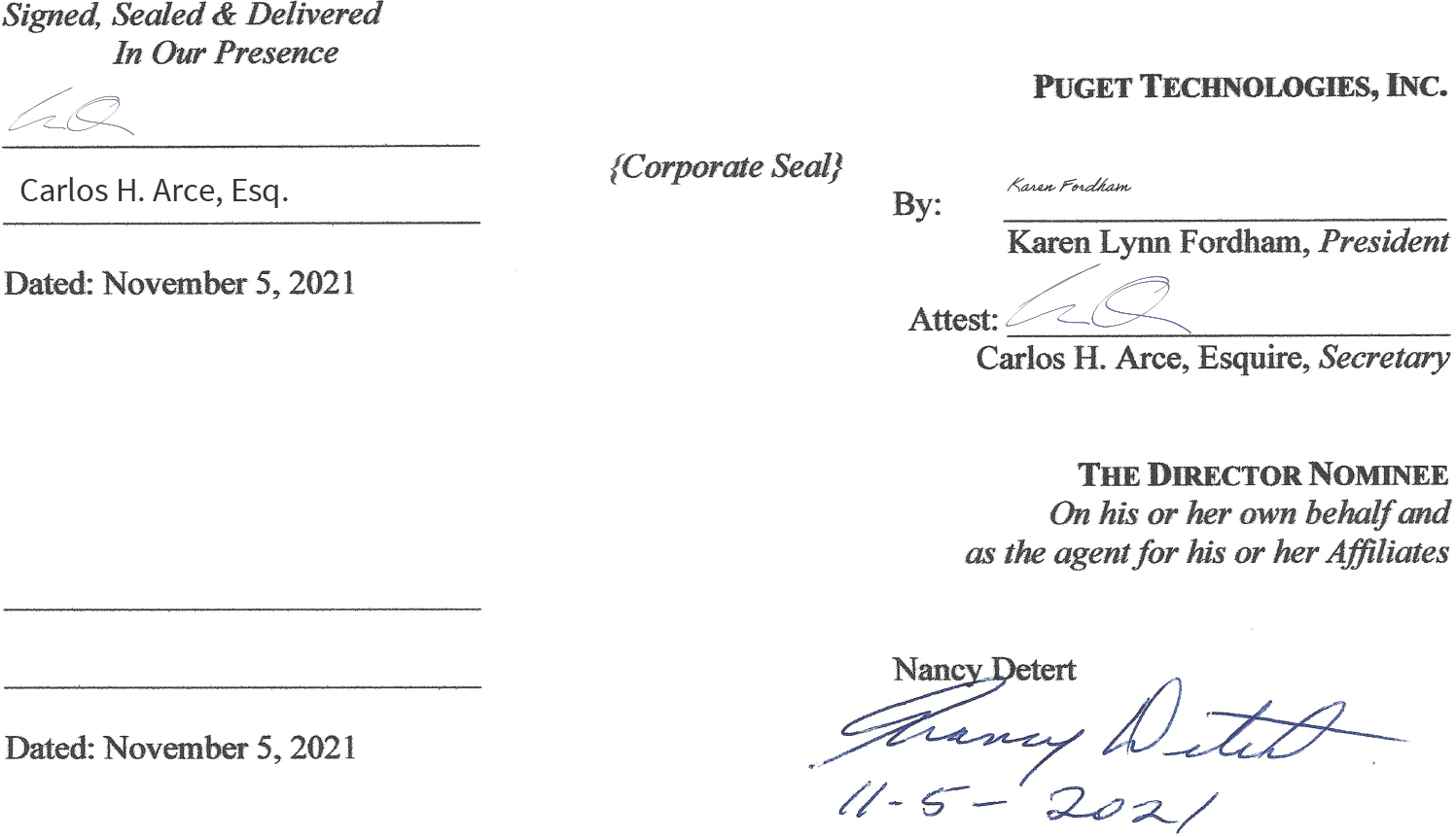