Contract Categories: Business Operations - Services Agreements
EX-10.31 2 pressure_pumpingxservicesx.htm EXHIBIT 10.31 Exhibit
Execution Version
PRESSURE PUMPING SERVICES AGREEMENT
#5795049
This Pressure Pumping Services Agreement (this “Agreement”), effective as of the Effective Date (as defined in Article 25), is between Pioneer Natural Resources USA, Inc., a Delaware corporation with its principal place of business at 5205 North O’Connor Blvd., Suite 200, Irving, Texas 75039 (“Company”), and ProPetro Services, Inc., a Texas corporation with its principal place of business at 1706 S. Midkiff, Bldg. B, Midland, Texas 79701 (“Contractor”). Company and Contractor are sometimes hereinafter individually referred to as a “Party,” and collectively as the “Parties.”
WHEREAS, Company is the operator of certain oil and gas wells drilled and to be drilled in certain areas;
WHEREAS, Company desires Contractor to provide dedicated hydraulic fracturing Fleets (as defined in Article 3) to Company for the performance of fracture stimulation pumping services, including all pump down operations associated therewith, and provision of associated products in connection with Company’s operations (the “Services”); and
WHEREAS, Contractor desires to perform, and represents that it has fully-trained personnel capable of performing Services as required by Company;
NOW, THEREFORE, for and in consideration of the covenants and promises herein contained, and other good and valuable consideration, the receipt and sufficiency of which is hereby acknowledged, the Parties hereto agree as follows:

-2-
determine the equipment included in each Fleet, subject to (i) Contractor’s compliance with the requirements of this Agreement, and (ii) Contractor consulting with Company within a reasonable period of time (but at least ten (10) days) before changing the then-current configuration or components of any Fleet.
-3-
not yet implemented, to agree to a commercially reasonable plan to acquire and implement such new technology; and (ii) to make equitable adjustments to the Net Price Book, the composition of a Fleet, and the minimum Efficiency Rate and Per Pad Stage Attainment Rate to account for such improvements.
-4-
Time (defined below) nor any time period that the Parties may agree to, including a holiday or time period associated with a weather event, shall be Company or Contractor Non-Productive Time (defined below). “Fleet Mobilization Time” is the amount of time, as is mutually agreed to between Company and Contractor, that each Fleet is allowed to move between pads in order to set up and be Mobilized on Location. A Fleet will be “Mobilized on Location” when the Fleet is fully mobilized on a Company well-site and fully capable of performing the Services.
First, calculate the target number of Stages to be attained for a day of Services by a Fleet:

-11-
or to such other place and with such other copies as either Party may designate as to itself by written notice to the other Party.
-12-
be construed as terms of limitation. Examples will not be construed as to limit, whether expressly or by implication, the matter they illustrate. The words “will” and “shall” are expressions of command, not merely expressions of future intent or expectation. The word “may” means has the right, but not the obligation, to do something, and the words “may not” mean does not have the right to do something. Unless otherwise expressly stated, the words “hereof,” “herein” and “hereunder” and words of similar import refer to this Agreement as a whole and not to any particular term of this Agreement. Unless otherwise expressly stated, the words “day,” “month” and “year” mean, respectively, calendar day, calendar month and calendar year. References to any law will be to such law as amended, supplemented or extended, or to a newly adopted law replacing such law. Headings are included for ease of reference only and will not affect the interpretation or construction of this Agreement.
[THE REMAINDER OF THIS PAGE IS INTENTIONALLY LEFT BLANK; SIGNATURE PAGES FOLLOW]

-13-
IN WITNESS WHEREOF, each of Company and Contractor has caused this Agreement to be signed and delivered by its duly authorized representative on the dates set forth below but effective for all purposes on the Effective Date.

[Signature Page to Pressure Pumping Services Agreement]
EXHIBIT A TO PRESSURE PUMPING SERVICES AGREEMENT
KEY PERFORMANCE INDICATORS FOR THE COILED TUBING SERVICES
Target KPI = 25 plugs drilled in a 24-hour period per well (average)
For illustrative purposes, performance over a period of time will be tracked and compared against expected drill-out rate of 25 plugs per 24-hour period
Example KPI Graph 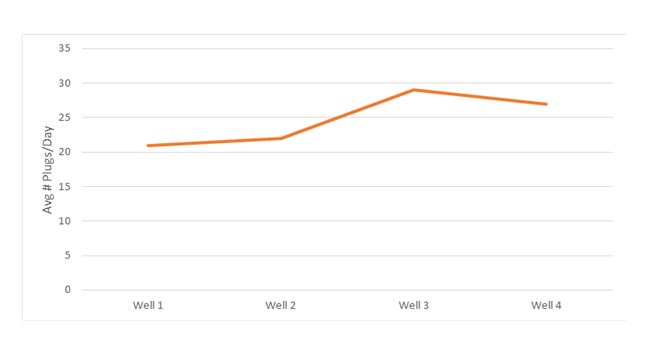 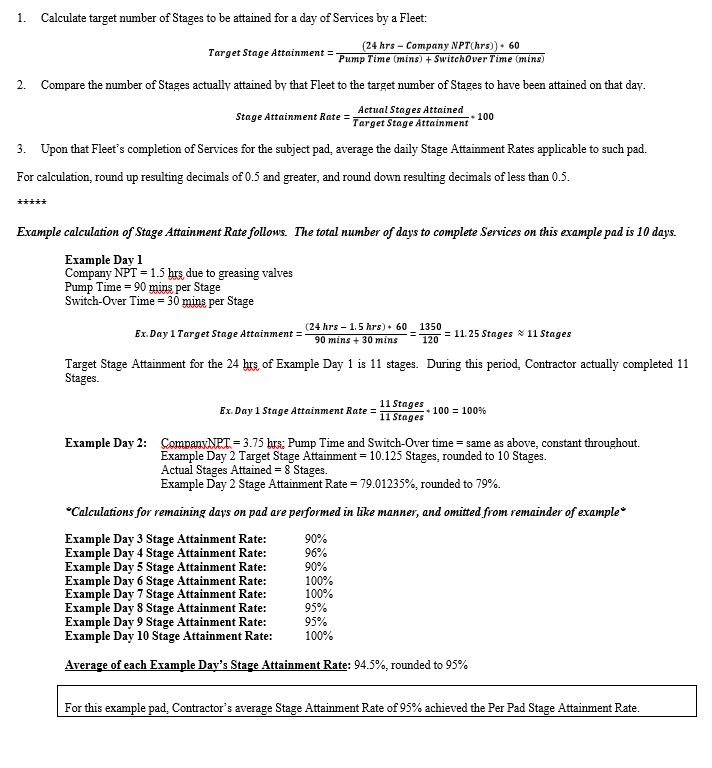