Amendment to Letter Agreement Dated April 1, 2015 between the Company and BayBoston Capital L.P., dated as of February 17, 2017 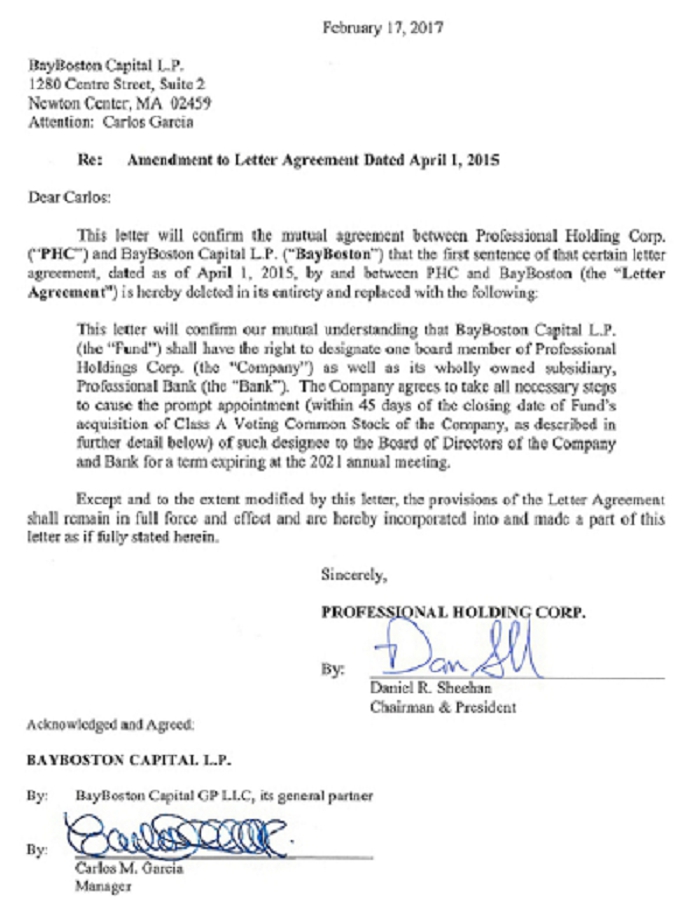 February 17, 2017 BayBoston Capital L.P. 1280 Centre Street, Suite 2 Newton Center, MA 02459 Attention: Carlos Garcia Re: Amendment to Letter Agreement Dated April 1, 2015 Dear Carlos: This letter will confirm the mutual agreement between Professional Holding Corp. ("PHC") and BayBoston Capital L.P. ("BayBoston") that the first sentence of that certain letter agreement, dated as of April 1, 2015, by and between PHC and BayBoston (the "Letter Agreement") is hereby deleted in its entirety and replaced with the following: This letter will confirm our mutual understanding that BayBoston Capital L.P. (the "Fund") shall have the right to designate one board member of Professional Holdings Corp. (the "Company") as well as its wholly owned subsidiary, Professional Bank (the "Bank"). The Company agrees to take all necessary steps to cause the prompt appointment (within 45 days of the closing date of Fund's acquisition of Class A Voting Common Stock of the Company, as described in further detail below) of such designee to the Board of Directors of the Company and Bank for a term expiring at the 2021 annual meeting. Except and to the extent modified by this letter, the provisions of the Letter Agreement shall remain in full force and effect and are hereby incorporated into and made a part of this letter as if fully stated herein. Sincerely, PROFESS ONAL HOLDING CORP. By: CON Daniel R. Sheehan Chairman & President Acknowledged and Agreed: BAYBOSTON CAPITAL L.P. By: BayBoston Capital GP LLC, its general partner By: *4111410 TWOS Carlos M. Garcia Manager