by and between NewBridge Global Ventures, Inc.

This Settlement & Mutual Release Agreement (the "Agreement") is executed on the Effective Date shown above by and between Jesse  Magallanes and  NewBridge  Global Ventures, Inc., a Delaware Corporation with  a  place of  business  at  l  Hawthorne Street, Suite 24A San Francisco CA 94105 ("NBGV") (Jess e Magallanes and NBGV individually "Party" and together the "Parties "), and is intended to effect a

settlement and mutual re le a se between the Pa r tie s.

Whereas, Jesse Magallanes has since l May, 2019, served as SVP Corporate Development of NBGV; and

Whereas, NBGV has accrued but not paid Jesse Magallanes a salary of $10,000 per month for his services beginning 1, January 2020 until the Settlement Date, and as of 31 August 2020 it is mutually agreed  by the  Parties  that the outstanding  balance  of the total unpaid amount owed to Jesse Magallanes is $80,000 (the "Outstanding Amount"; and

Whereas, Jesse Magallanes and NBGV entered into a similar agreement to settle outstanding debts through 31 December, 2019, an agreement which both Parties agree is superseded by this Settlement Agreement; and

Whereas, NBGV has limited funds to pay Jesse Magallanes the Outstanding Amount; and

Whereas the Parties wish to keep an amicable and respectful relationship with one another and to resolve all differences between the Parties;

NOW THEREFORE, in recognition of good and valid consideration the receipt and adequacy of which is hereby agreed, the Parties agree as follows:

2.Corporate Authority, Good Standing. Each of the Parties warrants and represents that it has legal authorization to enter into and to perform this Agreement.

3.Governing Law and Arbitration and Miscellaneous. This Agreement shall be governed by California law without reference to any "conflicts-of-laws" provisions and any dispute concerning the subject matter hereof, if not resolved by Arbitration shall be subject to the exclusive jurisdiction, and Jesse Magallanes and NBGV and its officers and directors respectively submit to the jurisdiction, of courts sitting in California. Each of the foregoing agrees to submit any dispute hereunder to non­ binding arbitration using commercial rules of the American Arbitration Association and using only one arbitrator sitting in Utah and only after an unreasonable and unjustified delay by any one of the foregoing after a hearing on the dispute and rendering of a decision by the Arbitrator may the non-delaying party in the first instance or any other party in the second instance seek judicial relief for any claim under this Agreement or dealing with the subject matter hereof. This Agreement contains the entire agreement of the Parties regarding the subject matter of this Agreement, and there are no other promises or conditions in any other agreement whether oral or written. The Parties have attempted to limit the non-competition provision so that it applies only to the extent necessary to protect legitimate business and property interests. If any provision of this Agreement shall be held to be invalid or unenforceable for any reason, the remaining provisions shall continue to be valid and enforceable. If a court finds that any provision of this Agreement is invalid or unenforceable, but that by limiting such provision it would become valid and enforceable, then such provision shall be deemed to be written, construed, and enforced as so limited.

4.Confidentiality. The Parties agree to keep the terms and substance of this Agreement (including but not limited to any amounts paid pursuant thereto), and any of the underlying facts confidential and to refrain from disclosing the same at any future time, or to any other individual or entity whatsoever, except as NBGV

may be required to report to the SEC and publicly disclose concerning this transaction and/or file with the SEC a copy of this Agreement.

IN WITHESS WHEREOF, Jesse Magallanes and NBGV have executed the Agreement as of the Effective Date above. 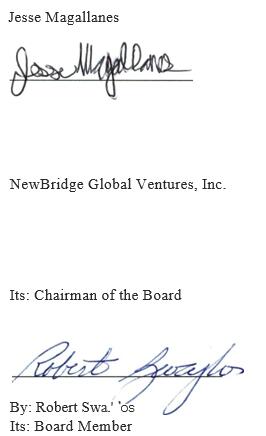