Seventh Amendment of Lease Agreement, dated May 10, 2017, by and between Investment Property Group, LLC and Medallion Bank

THIS AMENDMENT (this “Amendment”) is entered into as of the 10th day of May, 2017, between INVESTMENT PROPERTY GROUP, LLC, a Utah limited liability company (“Landlord”), as successor-in-interest to B-line Holdings, L.C., a Utah Limited Liability company, and MEDALLION BANK, a Utah industrial bank (“Tenant”). (Landlord and Tenant are referred to in this Amendment collectively as the “Parties” and individually as a “Party.”)

FOR GOOD AND VALUABLE CONSIDERATION, the receipt and sufficiency of which are acknowledged, the Parties agree as follows:

2.    Purpose. The Parties desire to expand the Premises currently covered by the Lease as follows, and make certain other amendments to the Lease, in accordance with the terms and conditions set forth in this Amendment:

3.    Defined Terms. Effective as of, and for the period on and after, July 1, 2017, the following definitions in Section 1 of the Lease are revised to read as follows; provided, however, that if the additional 1,873 rentable square feet is added to the Premises after July 1, 2017, then the periods set forth below shall begin on such other date that such addition occurs (as memorialized in a certificate entered into between the Parties); in addition, Tenant shall continue to pay Base Rent on the so-called “mother’s room” of the Premises until relinquished by Tenant to Landlord at the rate of $20.11 per rentable square foot (or $165.91 per month, prorated on a per diem basis for any partial calendar month):

Base Rent means the following amounts per calendar month for the periods indicated:

Notice Address for Landlord for purposes of Section 17 of this Lease means the following:

with a required copy to:

Term means a period expiring on the Termination Date, as such period may be extended or sooner terminated in accordance with this Lease.

Termination Date means November 30, 2022, as such date may be extended or sooner terminated in accordance with this Lease.

(a)    Tenant shall have the option to extend the Term for one (1) additional period of five (5) years, provided that Tenant gives Landlord written notice of the exercise of such option on or before the date that is twelve (12) months prior to the expiration of the then-existing period constituting the Term, and that at the time such notice is given and on the commencement of the extension term concerned, (i) this Lease is in full force and effect, (ii) Tenant is not in default under the Lease beyond the expiration of any applicable notice and cure period given to Tenant in the Lease, (iii) Tenant has not assigned this Lease or subleased all or any portion of the Premises under any then-existing sublease, and (iv) such extension is not being exercised in connection with or for the purpose of facilitating any such assignment or sublease. Such extension term shall commence at 12:01 a.m. on the first day following the expiration of the immediately preceding period constituting the Term.

(b)    During such extension term, all provisions of the Lease shall apply, except for any provision relating to the improvement of the Premises by Landlord or at Landlord’s expense, and except that the amount of Base Rent for such extension term shall be negotiated and determined by mutual agreement between the Parties, and shall be the then-market rent for the Premises. The term “then-market rent” as used in the immediately preceding sentence shall mean the annual amount, projected during such extension term, that a willing, comparable, non-equity tenant (excluding assignment and sublease transactions) would pay, and a willing, comparable landlord of a comparable building located in the same market as the Building would accept, at arm’s length (without compulsion to agree) for lease extensions or renewals (including what Landlord is accepting for current lease extension or renewal transactions for the Building), for general office space of similar rentable square footage,

(a)    During the Term, provided that (i) this Lease is in full force and effect, (ii) Tenant is not in default under the Lease beyond the expiration of any applicable notice and cure period given to Tenant in the Lease, (iii) Tenant has not assigned this Lease or subleased all or any portion of the Premises under any then-existing sublease, and (iv) the right of first offer described in this Paragraph 5 is not being exercised in connection with or for the purpose of facilitating any such assignment or sublease, Landlord shall give Tenant notice of any space (the “ROFO Space”) located on the third or the fifth floors of the Building that is available for lease to third parties. (For purposes of this Paragraph, any space covered by a renewal, extension or expansion option existing in any tenant’s lease as of the date of this Amendment, any renewal or extension option given by Landlord to any then-existing tenant for its then-existing space, or any right of first offer or right of first refusal existing as of the date of this Lease, shall not be “available for lease” until after each such option or right has expired.)

(b)    If Tenant gives Landlord notice of Tenant’s interest in leasing the ROFO Space within ten (10) business days after notification by Landlord of the availability of the ROFO Space, the Parties shall negotiate reasonably to enter into an amendment to this Lease covering the ROFO Space, which may include, without limitation, an extension of the Term and an increase in Base Rent payable under this Lease during such extension. If Tenant fails to give Landlord such notice within such ten (10)-business day period, or if the Parties, after using their best efforts, are unable to agree on the amount of the monthly rental and other terms and conditions for the ROFO Space within thirty (30) days after receipt by Landlord of Tenant’s notice of interest in leasing the ROFO Space (as evidenced by the execution and delivery of an amendment to this Lease), such right of first offer shall terminate and be of no further force or effect with respect to such ROFO Space, but shall continue to apply to other subsequently available ROFO Space.

8.    Enforceability. Each Party represents and warrants that:

(a)    such Party was duly formed and is validly existing and in good standing under the laws of the state of its formation;

(b)    such Party has the requisite power and authority under all applicable laws and its governing documents to execute, deliver and perform its obligations under this Amendment;

(d)    this Amendment has been duly authorized, executed and delivered by such Party; and

(e)    this Amendment is the legal, valid and binding obligation of such Party, and is enforceable against such Party in accordance with its terms.

(a)    Landlord represents and warrants to Tenant that no claim exists for a brokerage commission, finder’s fee or similar fee in connection with this Amendment based on any agreement made by Landlord; and

(b)    Tenant represents and warrants to Landlord that no claim exists for a brokerage commission, finder’s fee or similar fee in connection with this Amendment based on any agreement made by Tenant.

interpreted in accordance with, the laws (excluding the choice of laws rules) of the state of Utah. This Amendment may be executed in any number of duplicate originals or counterparts, each of which when so executed shall constitute in the aggregate but one and the same document. Each exhibit referred to in, and attached to, this Amendment is an integral part of this Amendment and is incorporated in this Amendment by this reference.

THE PARTIES have executed this Amendment on the respective dates set forth below, to be effective as of the date first set forth above.

(a)    The final space plan (the “Space Plan”) for the Premises, mutually approved by the Parties, is or will be attached as Appendix 1.

(d)    All bids and all costs will be provided to Tenant for approval per an “open book” process. The cost of the Tenant Improvements shall be calculated at Landlord’s actual cost, with no additional markup or profit to Landlord. Landlord shall provide Tenant with reasonable input into the bidding process (including bid review) so long as Tenant’s actions do not delay such process or the completion of the Tenant Improvements; provided, however, that Landlord reserves the sole right and discretion, acting reasonably, to make all final decisions regarding selection of contractors, subcontractors and material suppliers, unless (except for all design/build subcontractors, that is, fire/life safety, mechanical, electrical and plumbing subcontractors, which shall not be subject to the following limitation) Tenant, acting reasonably, objects within five (5) business days after the acceptance of any bid of any subcontractor or material supplier to such bid as being an above-market bid (which objection shall be accompanied by a statement of the correct amount of a market bid and reasonable supporting evidence

(g)    Beginning with the Premises in their current “as is” condition as of the date of the Amendment, all improvements to the Premises shall be made at Tenant’s sole cost and expense, subject only to the TI Allowance.

2.    Change Orders. If, prior to the Commencement Date and after the Tenant Improvement Plans and the construction budget have finally been approved by Tenant, Tenant requires improvements or changes (individually or collectively, the “Change Orders”) to the Premises in addition to, revision of, or substitution for, the Tenant Improvements, Tenant shall deliver to Landlord for its approval plans and specifications for such Change Orders. Within five (5) business days after such delivery by Tenant,

(a)    Landlord shall contribute the total amount of $100,000.00 (the “TI Allowance”) toward the costs incurred for the Tenant Improvements and Change Orders, including, without limitation, painting, carpeting, tile, wall covering, light fixtures, plans, permits, insurance and architectural fees (but expressly excluding Tenant’s personal property). The TI Allowance will be allocated $87,620.00 to the initial expansion and the existing space, and $12,380.00 to the subsequent expansion.

(b)    Landlord has no obligation to pay for the cost of any Tenant Improvements or Change Orders in excess of the TI Allowance, and if the cost of the Tenant Improvements and Change Orders exceeds the TI Allowance as allocated, Tenant shall pay such overage to Landlord within ten (10) business days after the receipt of an invoice therefor, accompanied by such detail as may reasonably be requested by Tenant, which invoice may be delivered prior to the commencement of construction. 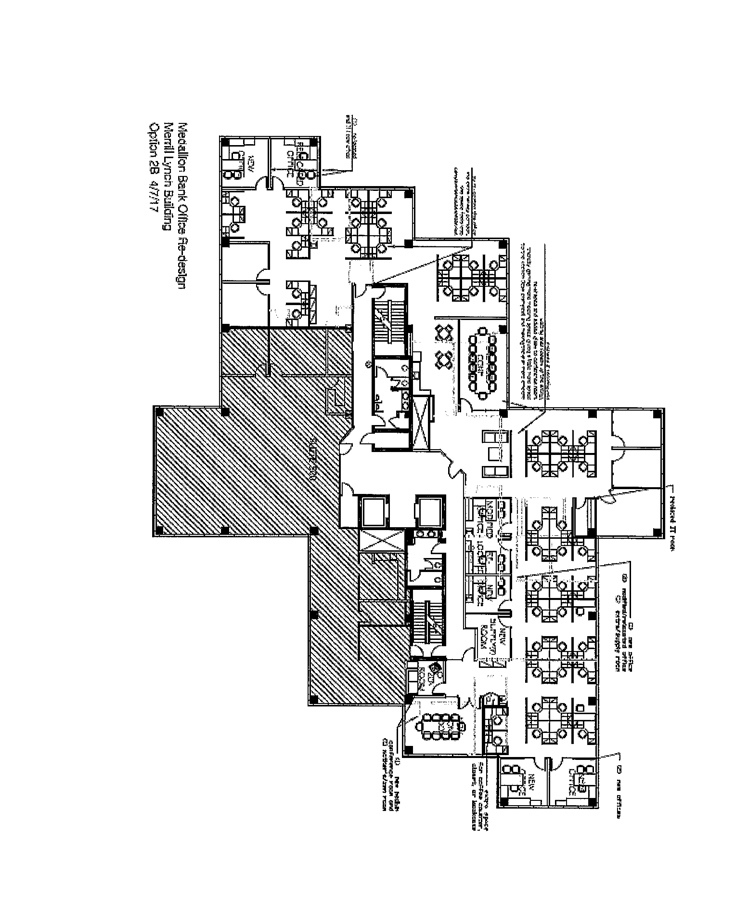 PREMISES (AS OF INITIAL EXPANSION)

PREMISES (AS OF SUBSEQUENT EXPANSION)