Contract Categories: Human Resources - Bonus & Incentive Agreements
EX-10.1 2 ex101executivestiprevised0.htm EX-10.1 Document
The Joint Corp.
Executive Short-Term Incentive Plan (STIP)
(Amended May 2, 2021)
Plan Overview
The Joint Corp. (“the Company”) Executive Short-Term Incentive Plan (“Executive STIP”) is an annual bonus plan. The STIP pool earned for each year will be determined based upon the achievement of the Company’s Target EBITDA for that year. Upon achievement of the Target EBITDA for the calendar year, each dollar of EBITDA in excess of Target EBITDA will be credited to a pool, which will be combined with the Non-Executive STIP Pool (the “Combined Pool”) until a maximum Combined Pool is reached in an amount established by the Compensation Committee (the “Combined Pool Maximum”). Except for amounts earned pursuant to the EBITDA Bonus Accelerator described herein, in no event will the amount in the Combined Pool exceed the Combined Pool Maximum.

Eligibility: The CEO and CFO of the Company are eligible to participate in the Executive STIP. Unless otherwise agreed to in writing between the Company and a participant, participants must be actively employed by the Company on the date of payout in order to receive an award under the Executive STIP. The following are the eligible percentages of base salary:
CEO                65%
CFO                40%
Proration: For those participants whose employment with the Company starts during mid-year, their participation in the plan shall be prorated based on the number of days employed during that calendar year divided by 365 days. If the total amount in the STIP Pool is insufficient to award all participants (including the participants in the coinciding Non-Executive STIP) 100% of their STIP award, each participant’s award shall be reduced by his or her pro rata share of the shortfall.
Award: 100% of each individual Executive STIP award is a function of achieving results in excess of the Target EBITDA (defined below). The percentage of achievement of that metric will be the same as the percentage of funding (between 85% and 100%) of the maximum bonus pool. The Company will not fund the Combined Pool and no award will be granted unless the amount to be allocated to the Combined Pool would equal at least 85% of the Combined Pool Maximum (the “Award Threshold”), provided that if the amount allocated to the Combined Pool is less than the Award Threshold, the Board of Directors may in its sole discretion approve and create the Combined Pool under such terms and conditions as the Board of Directors may determine.
STIP awards are expected to be paid following approval by the Compensation Committee of the Board of Directors (the “Compensation Committee”) and completion of the Company’s annual audit. Executive STIP awards will be paid in cash by no later than March 15th of the following year.
EBITDA Bonus Accelerator: If total EBITDA achieved exceeds the Target EBITDA for the year after 100% funding of the STIP Pool discussed above, the Company will fund an additional 25% into the bonus pool (up to a maximum of 125% of the participants’ target STIP) to be allocated to participants on a pro-rata basis based on their respective eligibility. The STIP Pool plus this additional 25% Bonus Accelerator will represent the Adjusted STIP Pool to be awarded.
Plan Description
Target EBITDA: In connection with the annual budgeting process, the Company will establish an annual budget with corresponding EBITDA that must be approved by the Board of Directors of the Company.
EBITDA Definition: The Company shall prepare a budget on a consistent basis from year to year and apply a consistent definition of EBITDA. The company currently defines EBITDA as net income (loss) before interest expense, income taxes, depreciation, and amortization expenses.
Example of Combined Pool and EBITDA Bonus Accelerator 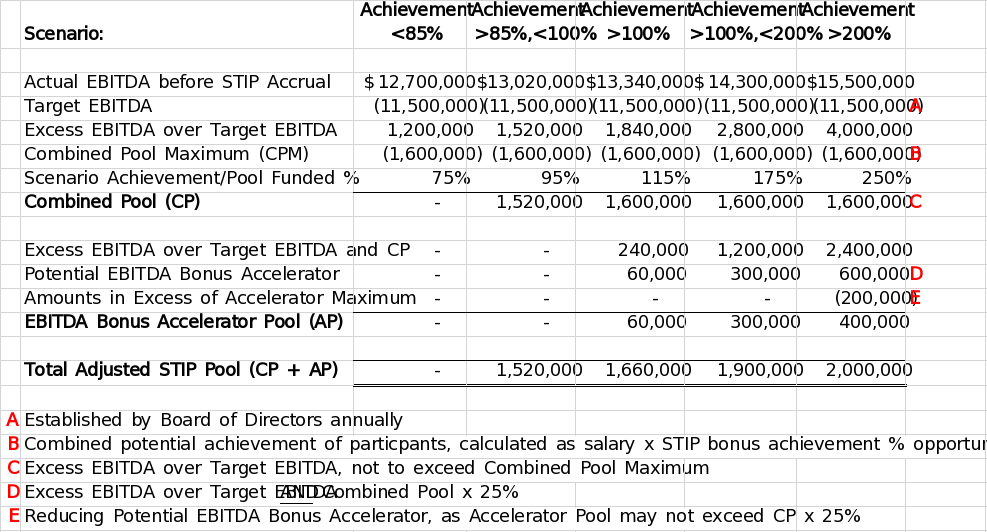