Amendment No. 1 to Technology Assignment Agreement, dated as of May 31, 2017, between The University of British Columbia and InMed Pharmaceuticals Inc

THIS AMENDMENT AGREEMENT dated for reference as of the 31st day of May, 2017 (the “Effective Date )

THE UNIVERSITY OF BRITISH COLUMBIA, a corporation continued under the University Act of British Columbia with offices at #103-6190 Agronomy Road, Vancouver, British Columbia, V6T 1Z3

INMED PHARMACEUTICALS INC., a corporation incorporated under the laws of British Columbia, with a registered office at #350-409 Granville St., Vancouver, BC, V6C 1T2

2.       Amendment to Definition of “Improvements”

The Assignment Agreement is hereby amended as of the Effective Date by deleting Section 1.1(d) and substituting therefor the following:

“(d) "Improvements" means improvements, variations, updates, modifications, and enhancements made and/or acquired at any time after the Effective Date by:

directly relating to the Technology and within the Field;”

Except as expressly amended hereby, all other terms and conditions of the Assignment Agreement remain unchanged and in full force and effect.

IN WITNESS WHEREOF the parties have executed this Amendment Agreement as of the Effective Date. 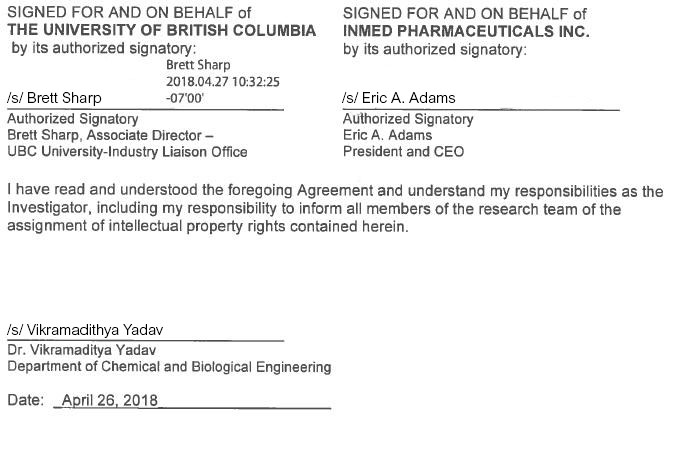