THIS FIRST AMENDMENT TO THE COLLABORATIVE RESEARCH AND DEVELOPMENT AGREEMENT (“Agreement”) is entered into with an effective date as of the 5th day of October 2012 (the “Amendment Effective Date”) by and among, on the one hand, Inhibikase Therapeutics, Inc., a Delaware corporation, with offices located at 3350 Riverwood Parkway, Suite 1927, Atlanta, Georgia (the “Company”) and, on the other hand, Sphaera Pharma Pte. Ltd., a company incorporated under the laws of Singapore with its registered office at 8 Temasek Boulevard, #22-03 Suntec Tower 3, Singapore 038988 (“Sphaera Singapore”) and Sphaera Phanna Pvt. Ltd., with its registered office at E-375, First Floor, Greater Kailash-II, New Delhi-110048, INDIA (“Sphaera India”)(together with Sphaera Singapore, hereinafter referred to as “Sphaera Pharma”). (Company and Sphaera Pharma shall be referred to individually as a “Party” and collectively as the “Parties.”) Except as otherwise provided in this Agreement, capitalized terms and phrases shall have the meaning ascribed thereto in the Original Agreement (as defined below)

WHEREAS, Sphaera Pharma and Company entered into that certain Collaborative Research and Development Agreement as of the 29 day of February 2012 (the “Original Agreement”) to address, among other things, certain issues relating to the Company Compounds (as defined below); 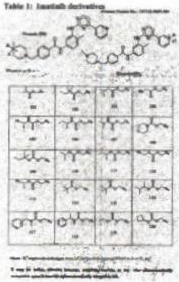 i.                    By Sphaera Pharma. Sphaera Pharma grants to Company an exclusive (even as to Sphaera), worldwide, royalty-free, fully paid-up license to the Mixed Patents and any and all know how and materials controlled by Sphaera Pharma relating thereto and useful in the practice thereof to make, Develop, use, sell, offer to sell, and otherwise exploit Company Compounds and related compositions and methods for the period commencing with the Amendment Effective Date and ending on the later to occur of the expiration of the last valid claim covering Company Compounds and related compositions and methods or the 15th anniversary of the Amendment Effective Date; provided, however, that such license is subject to Section 10 of the Original Agreement.

ii.                  By Company. Company grants to Sphaera Pharma an exclusive (even as to Company), worldwide, royalty-free, fully paid-up license to the Mixed Patents and any and all know how and materials controlled by Company relating thereto and useful in the practice thereof to make, Develop, use, sell, offer to sell, and otherwise exploit Sphaera Compounds and related compositions and methods for the period commencing with the Amendment Effective Date and ending on the later to occur of the expiration of the last valid claim covering Company Compounds and related compositions and methods or the 15th anniversary of the Amendment Effective Date (the “Term”); provided, however, that Sphaera Pharma hereby grants to Company a right of first offer to license for the Term exclusively under the Mixed Patents and know-how and materials relating thereto and useful in the practice thereof from Sphaera Pharma the right to make, use, sell, offer to sell, and otherwise exploit any such Sphaera Compound and related compositions and methods only within the field of infectious disease, the terms of which license both parties agree to use commercially reasonable efforts to negotiate in good faith and which shall be on customary terms and conditions for licenses of similar intellectual property. To the extent Company wishes to obtain a license to the Mixed Patents to make, use, sell, or offer to sell any of the Sphaera Compounds (i.e., compounds 114-120 of Table 1, or any other compound envisioned, implied or subsumed within the applications 61/709704 in the United States and 3105/DEL/2012 in India filed on 4 October, 2012, other than the Company Compounds), such a license will require an agreement and acceptance by Sphaera Pharma; for purposes of such license, the financial terms and conditions thereof shall be negotiated by the parties, with Article 2, entitled “Consideration of Services,” of the Original Agreement having applicability to only the Company Compounds. For the purpose of clarity, except as otherwise provided in this Section (e)(ii), Sphaera Pharma may use the Sphaera Compounds outside the scope of the Original Agreement without restriction and without any further approval or agreement from Company.

“(a) Company shall neither undertake to Develop nor Develop or, if in the process of Developing, shall cease developing any one of the Company Compound for which Company is notified in writing by Sphaera Pharma that Sphaera Pharma has filed an IND on such Company Compound for a cancer indication in humans, and (b) Sphaera Pharma shall neither undertake to Develop nor Develop or, if it in the process of Developing, shall cease Developing any Company Compound for which Sphaera Pharma is notified in writing that an IND has been filed for such Company Compound, which limitation shall remain in effect for the period during which such Development remains continuously active. As such, each of the Parties agrees to provide to the other written notice of it determining to both (y) choose as a lead candidate for Development one of the Company Compounds and, as a result thereof, (z) commence IND-enabling studies for the purpose of filing an IND, which notice shall be delivered to the other Party within ten (10) consecutive calendar days of any such determination. For purposes of this section, “Development” or “Develop” shall mean those activities relating to non- clinical and clinical research and drug development, including, without limitation, toxicology, pharmacology and other discovery efforts, test method development and stability testing, process development, formulation development, delivery system development, quality assurance and quality control development, statistical analysis, clinical studies or trials (including pre-approval studies and investigator sponsored clinical studies or trials), regulatory affairs and clinical study or trial regulatory activities (excluding, however, regulatory activities directed to obtaining pricing and reimbursement approvals and activities constituting manufacturing, marketing, sales, distribution or other commercialization); and “IND” shall mean an investigational new drug application filed with the U.S. Food and Drug Administration (“FDA”) or any equivalent filing with any governmental agency having regulatory authority similar to that of the FDA for a jurisdiction other than the U.S.”

ii.                  Unless and until expansion of the Original Agreement is executed between the parties, Company cannot and will not pursue any development of the Sphaera Compounds 114-120 of Table 1.

b.                  Failure by Company to pay the Project Fixed Fees by the first anniversary of the Amendment Effective Date may constitute grounds for termination of the Original Agreement in accordance with Article 12 thereof, but shall not otherwise affect the rights of the Parties as described thereunder or under this Agreement.

4.                  Counterparts. This Agreement may be executed in several counterparts, each of which shall be deemed an original, but together they shall constitute one and the same instrument.

[Signatures continued on next page.]

IN WITNESS WHEREOF, the parties have caused this Agreement to be executed by their duly authorized representatives.