WHEREAS, effective 15 December 2002 you commenced employment with the Company (or one of its predecessor or affiliated companies) as Specialist Lines Underwriter, progressing to Active Underwriter, Syndicate 1084, and most recently as Chief Underwriting Officer;

WHEREAS, subject to formal approval by the Company’s Board of Directors and any required U.K. regulatory approvals, commencing 20 February 2017 you shall serve as the Company’s Chief Executive Officer; and

WHEREAS, in connection with the change in your duties and responsibilities, it is advisable to amend and restate your service agreement.

NOW THEREFOR, for good and valuable consideration the receipt and sufficiency of which is hereby acknowledged, the parties agree as follows.

The Company shall reimburse all reasonable out of pocket expenses properly incurred by you in the performance of the duties under this Agreement including travelling, subsistence and entertainment expenses provided you follow the Company's guidelines/allowances in force at the relevant time and provided that you shall, where reasonably practicable, provide the Company with vouchers, invoices or such other evidence of such expenses as the Company may reasonably require.

Notwithstanding the foregoing, nothing in this Agreement shall bar or prohibit you from contacting, filing a complaint or seeking assistance from or participating in any proceeding before the Securities and Exchange Commission to the extent permitted by applicable law.

“Insured” means a person, company or group for which an Insurance policy is issued;

“Insurer” is an insurer or reinsurer of Insurance;

“Person” means any person, firm, company, partnership, trust or any other legal entity;

“Relevant Period” means the period of 12 months ending on the Termination Date or, in the event of you being placed on Garden Leave (as defined in clause 13.1) the 12 months immediately preceding the first day of Garden Leave;

“Restricted Period” means the period of 12 months from the Termination Date (howsoever the termination was caused and whether in breach of contract or otherwise); and

There are no collective agreements which directly affect your terms and conditions of employment.

“Personal Data” means data which relate to a living individual who can be identified from those data or from those data and other information which is in the possession of, or is likely to come into the possession of, the data controller and includes any expression of opinion about the individual and any indication of the intentions of the data controller or any other person in respect of the individual.

“Sensitive Personal Data” means personal data consisting of information as to racial or ethnic origin, political opinions, religious beliefs or other beliefs of a similar nature, membership of a trade union (within the meaning of the Trade Union & Labour Relations (Consolidation) Act 1992), physical or mental health or condition, sexual life, the commission or alleged commission of any offence or any proceedings for any offence committed or alleged to have been committed, including the disposal of such proceedings or the sentence of any Court in such proceedings.

You must adhere to the Parent Company policy on dealing in securities and with regard to unpublished price sensitive information (See “Insider Trading Policy”). Failure to adhere to these policies may, subject to the Disciplinary and Dismissal Procedures, result in summary dismissal.

During the continuance of the employment hereunder you:

Provided that nothing in this Clause shall prevent you from giving or participating in entertainment or business practices which are customary in the business in which the Company or any Group Company is involved from time to time.

During the term of this Agreement and at all times thereafter, you shall furnish such information and proper assistance to the Company or any Group Companies as it or they may reasonably require in connection with litigation in which it is or they are or may become a party.  This obligation on your behalf shall include, without limitation, meeting with the Company or any Group Company's legal advisors, providing witness evidence, both in written and oral form, and providing such other assistance in the litigation that the Company or any Group Company's legal advisors in their reasonable opinion determine.  The Company shall reimburse you for all reasonable out of pocket expenses incurred by you in furnishing such information and assistance.  In addition, you agree to give such assistance in any internal or regulatory investigation and regulatory proceedings.  For the avoidance of doubt the obligations under this Clause 23 shall continue notwithstanding the termination of this Agreement.

to determine this Agreement forthwith on giving notice in writing to you and in the event that you do not accept the employment by such other person, firm or company, you shall not be entitled to any compensation from the Company for loss of office or damages for breach of this Agreement.

You hereby irrevocably appoint any other director of the Company from time to time, jointly and severally, to be your attorney in your name and on your benefit to sign any documents and do things necessary or requisite to give effect to those matters which you are obliged to do pursuant to this Agreement (including, but not limited to, Clauses 13, 14, 17 and 18).  In favour of any third party a certificate in writing signed by any director or by the secretary of the Company that any instrument or act falls within the authority hereby conferred shall be conclusive evidence that such is the case. This clause remains in force following termination of your employment howsoever caused and whether terminated in breach or otherwise.

These terms and conditions constitute the entire agreement between the parties and supersede any other agreement whether written or oral previously entered into.

This Agreement shall be governed by and interpreted in accordance with the laws of England and Wales and the parties to this Agreement submit to the exclusive jurisdiction of the English Courts in relation to any claim, dispute or matter arising out of or relating to this Agreement.

Any notices with respect to this Agreement shall be in writing and shall be deemed given if delivered personally (upon receipt), sent by facsimile (which is confirmed) or sent by first class post addressed, in the case of the Company, to its registered office and in your case, addressed to your address last known to the Company.

IN WITNESS whereof this DEED has been executed by each of the parties on the date first above written. 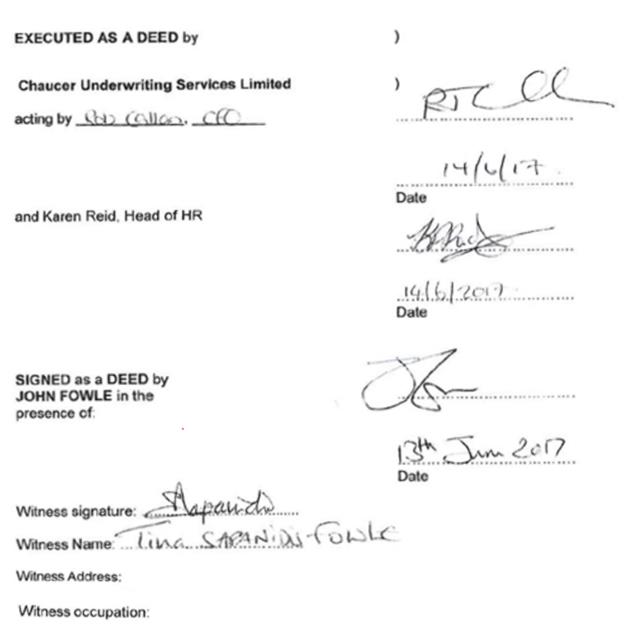