Amendment #3 to the Unified In-Flight Connectivity Hardware, Services and Maintenance Agreement, dated as of September 4, 2018, between Gogo LLC and American Airlines, Inc

THE USE OF THE FOLLOWING NOTATION IN THIS EXHIBIT INDICATES THAT THE CONFIDENTIAL PORTION HAS BEEN OMITTED PURSUANT TO A REQUEST FOR CONFIDENTIAL TREATMENT AND THE OMITTED MATERIAL HAS BEEN FILED SEPARATELY WITH THE SECURITIES AND EXCHANGE COMMISSION: [***]

This Amendment Three (this “Amendment”) to the Unified In-Flight Connectivity Hardware, Services and Maintenance Agreement, dated as of February 1, 2017, as previously amended (as so amended, the “Original Agreement”), by and between American Airlines, Inc. (“American”) and Gogo LLC (“Gogo”) (collectively the “Parties” and individually a “Party”), is made and entered into this September 4, 2018 (the “Amendment Effective Date”).

WHEREAS, American desires to launch IPTV Services on Retrofit A/C in the 2Ku Fleet to provide live television programming] to passengers on such aircraft;

WHEREAS, American and DISH Network L.L.C. (“Dish”) have entered into an agreement under which American has been granted rights by Dish to receive, distribute, transmit, exhibit and display certain live television programming on the Retrofit A/C in the 2Ku Fleet (the “AA-Dish Agreement”);

WHEREAS, Gogo, American, and Dish have entered into an agreement under which Dish granted all licenses to Gogo that are required for Gogo to provide the IPTV Services to American (the “Gogo-American-Dish Agreement”);

WHEREAS, Gogo and American have been involved in negotiations to amend the Original Agreement to reflect the addition of IPTV Services on the Retrofit A/C in the 2Ku Fleet and intend to continue such negotiations in good faith; and

WHEREAS, the Parties desire to amend the Original Agreement to reflect the launch of the IPTV Services on the Retrofit A/C in the 2Ku Fleet.

NOW, THEREFORE, in consideration of the foregoing premises and the covenants contained herein, American and Gogo agree as follows:

[Signatures appear on the next page]

IN WITNESS WHEREOF, the parties have executed and delivered this Amendment as of the Amendment Effective Date.

This Exhibit R is intended to set forth the Parties’ respective rights and obligations with respect to IPTV Services. For the avoidance of doubt, except where the context of the Original Agreement otherwise requires, the equipment, software and services described herein shall constitute Equipment, Software and IPTV Services, respectively, as such terms are defined in the Original Agreement. 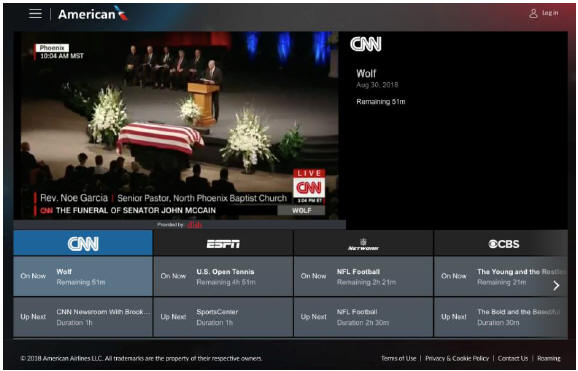