Amendment #7 to the Unified In-Flight Connectivity Hardware, Services and Maintenance Agreement, effective as of December 27, 2019, between Gogo LLC and American Airlines, Inc

THE USE OF THE FOLLOWING NOTATION IN THIS EXHIBIT INDICATES THAT THE CONFIDENTIAL PORTION HAS BEEN OMITTED PURSUANT TO ITEM 601(b)(10)(iv) WHEREBY CERTAIN IDENTIFIED INFORMATION HAS BEEN EXCLUDED BECAUSE IT IS BOTH NOT MATERIAL AND WOULD LIKELY CAUSE COMPETITIVE HARM TO THE REGISTRANT IF PUBLICLY DISCLOSED: [***]

This Amendment No. 7 to Unified In-Flight Connectivity Hardware, Services and Maintenance Agreement (this “Amendment”), is made effective on December 27, 2019 (the “Amendment Effective Date”), by and between AMERICAN AIRLINES, INC. (“American”), whose registered office is at 1 Skyview Dr., Fort Worth, TX 76155, and GOGO LLC (“Gogo”), whose registered office is at 111 N. Canal St., Suite 1500, Chicago, IL 60606 (collectively referred to as the “Parties” and each individually as a “Party”).

WHEREAS, the Parties agree to amend the Unified Agreement in connection with Gogo’s provision of services and development of software related to the SSOCP, as set forth in this Amendment; and

WHEREAS, the Parties intend that this Amendment be considered the “Definitive Agreement” contemplated by that certain Letter of Intent regarding the Development and Implementation of the American Airlines, Inc. In-Flight Connectivity Single Sign-On Common Portal dated August 31, 2017.

NOW, THEREFORE, in consideration of the mutual covenants contained in this Amendment, the Parties agree as follows:

“3.3.6 Changes. Any changes to the functionality of, or Specifications relating to, the Portal or SSOCP (including any Software related to the Portal or SSOCP) shall be addressed in accordance with Exhibit X. Any other (i.e., other than those relating to the Portal) changes or deviations from the Specifications, including without limitation changes or deviations that impact delivery, price, weight, power, dimensions, cooling requirement or reliability or otherwise impact form, fit and function, must be approved by both Parties (if applicable, in accordance with the provisions of Section 4.1 or 4.2.2 of this Agreement).”

Full SSOCP description, including NRE, management, maintenance, and other associated terms and pricing is set forth in Exhibits M and W.”

“Exhibits M and W set forth the terms and conditions related to validation of subscriptions under SSOCP.”

The Parties shall work in good faith to make any adjustments or revisions to this Amendment or the applicable portions of the Unified Agreement as may be necessary in order to carry out the intent of the foregoing.

IN WITNESS WHEREOF, the Parties have executed and delivered this Amendment as of the Amendment Effective Date.

Signature Page to Amendment No. 7 to Unified Agreement

Gogo shall implement American’s approved designs and customer messaging for the Portal as set forth in the Zeplin application and copy deck.

Development, Hosting and Maintenance of the SSOCP

This Exhibit W sets forth the responsibilities of Gogo and American with respect to the development, hosting and maintenance of the SSOCP (as defined below). Capitalized terms not defined herein shall have their meanings as set forth in the Unified Agreement.

This Exhibit W has the following structure:

There are five attachments to this Exhibit W:

American and Gogo will participate in building the overall Project schedule, as found in Attachment 3, and will work together to adhere to the schedule. American will coordinate efforts and contributions among the IFC Providers. The Parties agree and understand that alterations to the Specifications, through Change Requests or other mechanisms, may lead to delays to the Project schedule. 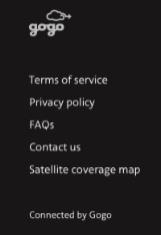 Gogo shall implement American’s approved designs and customer messaging for the on-the-ground purchase portal as set forth in the Zeplin application and copy deck.

Gogo shall deliver the SSOCP MVP program in accordance with the following target milestones:

The above milestones are based on the following assumptions:

The following Deliverables will be provided by Gogo per the indicated milestone:

American will conduct acceptance testing in accordance with the milestones set forth in Attachment 3 to this Exhibit W in order to determine whether the Deliverables meet the Acceptance Criteria. For purposes of this Attachment 4, “Acceptance Criteria” shall mean that, with respect to each Deliverable, such Deliverable does not contain (a) any Critical or Major defects, or (b) multiple Minor defects that, taken together, constitute a material deviation from the Specifications.

Within five (5) business days of completion of acceptance testing with respect to each Deliverable, American’s Tech Ops team will notify Gogo in writing (it being understood that an email to a Gogo-designated representative shall suffice) either with a “Non-Acceptance Notice” or an “Acceptance Notice” for such Deliverable. If American has not provided either of the foregoing notices within the applicable time period, then the Deliverables will be deemed accepted.

If American delivers a Non-Acceptance Notice to Gogo in accordance with the foregoing paragraph, Gogo shall have two (2) business days to submit an action plan to American to correct the concern, which plan shall include the time period required to complete the activities in such plan. American shall respond to Gogo’s action plan within two (2) business days to approve or modify the action plan. Gogo shall commence such approved or modified action plan within two (2) business days or as otherwise mutually agreed by the Parties, and shall perform in substantial conformance to such plan. Upon completion of any such plan, Gogo shall resubmit such Deliverable to American, and the previous paragraph shall then apply to such Deliverable as a new submission, provided that no new action plan shall be required unless the applicable non-conformance is unrelated to the existing plan, and instead Gogo will update the prior plan with any needed changes (including but not limited to an updated timeline). Notwithstanding the above, at any point in the acceptance process American may, in its discretion, accept any Deliverable notwithstanding the presence of any open defect(s).

Upon any acceptance, all unresolved defects, if any, shall be immediately subject to the SLAs set forth in Section 6 of Exhibit W. To the extent that American knows of a defect, American shall provide Gogo with specific notice thereof.

In the event that Gogo is unable to correct the concern following two (2) cycles of the above remediation effort and American does not accept the SSOCP Deliverables, American (a) may terminate this Exhibit W and Gogo shall not proceed with the launch of subscription migration and (b) shall be entitled to a refund of any fees associated with any such rejected Deliverable.

This Exhibit X describes the change control procedures to be followed by the Parties when either Party wishes to make a change to the functionality of, or Specifications relating to, the Portal or SSOCP (including any Software related to the Portal or SSOCP).