Lease Agreement, dated as of August 1, 2018, by and between McMaster University and the Registrant

Pursuant to the Short Form of Leases Act, THIS LEASE AGREEMENT is dated this 1st day of August 2018

OF THE FIRST PART,

OF THE SECOND PART

WHEREAS The Gore District Land Trustee Corporation (“Gore”) is the registered owner of the lands upon which the McMaster Innovation Park (“M1P”) is situated within the City of Hamilton (the “MIP Lands”);

AND WHEREAS Gore and The First Longwood Innovation Trust (“FLIT”) have entered into a headlease with respect to that portion of the MIP Lands located to the west of Longwood Road South (the “Lands ‘) dated January 1, 2011 for a term of 49 years and six months (the “Headlease”);

AND WHEREAS FLIT has entered into a sublease dated October 1, 2016 with First Longwood Warehouse Redevelopment GP Corporation (“FLWR”) for all of the building located at 200-270 Longwood Road South (the “Building”) on the MIP Lands and a leasehold parcel described on Schedule “A” attached hereto;

AND WHEREAS FLWR has entered into a sublease with the Landlord dated June 29, 2016 for certain premises in the Building as set out herein (the “Landlord Premises”);

AND WHEREAS the Landlord and the Tenant wish to set out the terms and conditions under which the Landlord will make available certain space in the Building as described herein;

AND WHEREAS the Tenant intends on using the herein demised Premises under conditions typical for work involving pharmaceutical and radiopharmaceutical substances for the purpose of discovering, developing, manufacturing, storing, distributing for the purposes of commercialization and future sale pharmaceutical products that may contain radioactive isotopes (radiopharmaceuticals) and other chemical or biological substances. This includes all associated office and laboratory functions typical of leading pharmaceutical companies, which may include work with biohazards (cells, bacteria, etc.) as preclinical models needed to develop new products and receive regulatory approvals, and ancillary administrative offices.

NOW THEREFORE this lease and licence witnesses that in consideration of the mutual covenants and agreements herein contained and subject to terms and conditions set forth herein, the parties hereto agree as follows:

In this Lease and in the schedules attached to this Lease:

ARTICLE 2 - TERM AND USE

The Landlord hereby covenants and represents that it has obtained all of the necessary consents and approvals in order to enter into this Lease, and to lease the Premises to the Tenant for the Use (as defined in Section 2.3 below) of the Premises contemplated herein as of the Commencement Date, including but not limited to any approvals or consents required from Gore, FLIT, and FLWR.

The Tenant shall operate from the Premises in accordance with this Lease and all applicable laws, statutes, regulations, permits, licences, orders and by-laws of any governmental or quasi-governmental and regulatory authority to ensure health, safety and compliance with material handling, storage and use. The Tenant shall operate under the Landlord’s licence for bio-safety as issued by the Public Health Agency of Canada during the Tenn. The Tenant shall also operate under the Landlord’s radiation safety licence issued by the Canadian Nuclear Safety Commission during the Term. In the event that the Landlord’s licences or either of them is revoked, suspended or expired without renewal, the Landlord shall have no more than thirty (30) days to reinstate the licence or apply for a new licence. If at any time thereafter the licence is still revoked, suspended or expired or there is no reasonable expectation that a new licence may be issued forthwith, the Tenant shall have the right to terminate this Lease on provision of 30 days written notice to the Landlord. Upon termination of this Lease pursuant to this Section 2.6, each party agrees to release the other from all claims, actions, damages and losses relating to the termination and loss of licence, Rent shall cease and the Tenant shall vacate and surrender to the Landlord the Premises.

The Tenant shall have the further obligation of making all needed repairs to the whole of the Premises which is necessary to maintain the improvements and equipment of the Building in such manner so that they function properly having regard to their nature, their age and the purpose for which they are intended to be used or to keep the appearance of Premises neat, clean and presentable, except for reasonable wear and tear and except for damage caused by fire or other insured casualty, the repair of which is provided for in Article

9 hereof, and except for damage caused by, or the need for repair resulting from, renovation or construction undertaken by the Landlord or others to other areas of the Building. Such repairs and maintenance shall be performed by the Landlord or its contractor/project manager to a standard consistent with the nature and condition of the Building as at the Commencement Date and subject to Article 9 of this Lease. Tenant shall communicate to Landlord promptly all needed repairs and maintenance and Landlord shall have a right upon not less than 48 hours written notice to inspect the Premises to confirm its state of repair. The costs of the Landlord’s services under this Section 4.2 shall be paid as Additional Rent.

Certificates of insurance shall be delivered to the Landlord annually, upon request, provided that the delivery to the Landlord of such certificates shall not limit or diminish the Tenant’s obligations contained in this subsection (b).

The Landlord shall not be liable for any damage or injury caused to any property of the Tenant or of others located on the Premises as a result of any such entry.

Notwithstanding the forgoing, the Landlord and the Tenant shall, prior to and at all times during the Lease, ensure that all insurance providers for the Premises are fully aware of the proposed Use of the Premises by the Tenant, including the presence or use of radiopharmaceuticals.

Such insurance shall be in such reasonable amounts and with such reasonable deductions as would be carried by a prudent owner of a property similar to the Building, having regard to size, age and location. The Landlord shall, upon request, provide a copy of an insurance certificate to the Tenant evidencing the placement of such insurance. Notwithstanding the Landlord’s covenant contained in this Section 7.5 and notwithstanding any contribution by the Tenant to the cost of the Landlord’s insurance premiums, the Tenant agrees that:

This indemnity is absolute and unconditional and shall survive the termination of this Lease or any Assignment thereof.

In addition, an Assignment shall not include the transfer of shares of the Tenant or a transfer of the shares of any parent, affiliate or subsidiary of the Tenant, it being acknowledged that such share transactions do not require the consent of the Landlord in relation to this Lease. In the event (and only in the event) of a permitted Assignment pursuant to Section 8.8(c), the current Tenant shall be released from all obligations in this Lease.

If to the Landlord:

If to the Tenant:

DESCRIPTION OF THE BUILDING, THE LANDS & THE PREMISES

The Building is situated on lands municipally known as 200-270 Longwood Road South, which Lands are legally described as follows:

The Premises are delineated in Red on the sketch attached hereto as Schedule A-l, being approximately 5,415 net assignable square feet of rentable area.

SCHEDULE “A-1” – SKETCH OF PREMISES 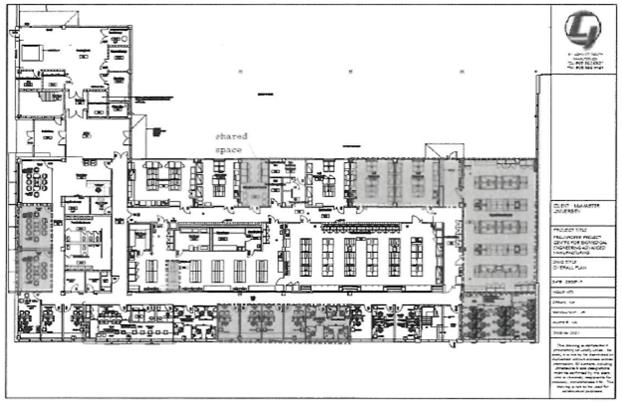 SCHEDULE “B” – DESCRIPTION OF COMMON AREAS

The Common Areas of the Building shall be considered:

The parking rates will be as follows:

The following rules are incorporated into each license for the use of a parking spot:

These rules may be amended by the Landlord at any time upon giving the Tenant notice of such amendment in writing or by posting the amendment in a public location for all Tenants and users of the Building to view.

For Users who also have McMaster University parking access privileges, reciprocal parking passes are available at the applicable rates set by McMaster from time to time for such passes with current rates set out below:

Tenant shall supply, activate and be responsible for all ongoing costs associated with telephones (VOIP).