TO THE COMPOSITE LEASE AGREEMENT

WHEREAS, the parties wish to amend the Composite Lease Agreement to remove certain buildings, which are considered end of life and out-dated facilities, by deleting a total of 160,372 square feet as part of Parcel 34 , originally included as Parcel 17, but more particularly identified in EXHIBIT A, Note 15, effective 1-1-2019, as these four affected buildings : (i) Hangar 6 ( Building Number 2879); (ii) Hangar 7 (Building Number 2837); (iii) Administration Building (Building Number 2861); and (iv) Boiler Room (Building Number 2838), and these properties are highlighted and identified in and attached hereto as EXHIBIT “B”, creating an annual reduction of $190,442.45 for the rental costs of these four (4) identified buildings located on Parcel 34, effective January 1, 2019.

WHEREAS, Tenant acknowledges that the demolition and deconstruction of these identified four buildings will cause Tenant to have specific responsibilities to the Federal Aviation Administration (FAA) to assure that demolition and documentation of the historic properties located thereon are carried out in accordance with the parties’ Memorandum of Agreement, identified herein and attached hereto as EXHIBIT “C”; and

WHEREAS, now the Authority concurs and gives Tenant permission to proceed with demolishing and deconstructing the same properties; and

NOW, THEREFORE, for and in consideration of the promises, covenants and agreements hereinafter contained to be kept and performed by the parties hereto and upon the provisions and conditions hereinafter set forth, Authority and Tenant do hereby covenant and agree as follows:

SECTION 3. Demolition and Deconstruction by Tenant

(a) Effective January 1, 2019, Authority hereby grants to Tenant for use by Tenant and its servants, agents, employees and independent contractors, working on or in connection with Tenant’s demolition and deconstruction of the identified four buildings located on

Parcel 34, all necessary or appropriate rights of reasonable access, ingress and egress to and from Parcel 34, and the right to do all such other things as may be incidental to Tenant’s demolition and deconstruction of the identified four buildings.

(b) Tenant shall obtain, at Tenant’s sole expense, all certificates and approvals relating to Tenant’s demolition and deconstruction of the identified four buildings located on Parcel 34.

(c) As part of its demolition and deconstruction of the identified four buildings on Parcel 34 under this Section, Tenant shall (i) remain in compliance with all applicable Environmental Laws and (ii) undertake, in compliance with the rules and regulations of any Governmental Authority having jurisdiction over the Parcel 34, all required cleanup activities with respect to environmental conditions caused by, arising out of or resulting from its demolition and deconstruction for the identified four buildings on Parcel 34.

SECTION 4. Remainder of Composite Lease in Effect. All other terms, provisions, conditions, covenants and agreements of the Composite Lease shall continue in full force and effect.

EXHIBIT “A”, EXHIBIT “B”, EXHIBIT “C”, and EXHIBIT “D”, attached hereto, shall be incorporated herein by reference.

This remainder of this page intentionally left blank.

IN WITNESS WHEREOF, the parties have caused their duly authorized representatives to execute this ELEVENTH Amendment to the Composite Lease Agreement.

EXHIBIT A to the Composite Lease Agreement as amended by the ELEVENTH Amendment effective January 1, 2019. 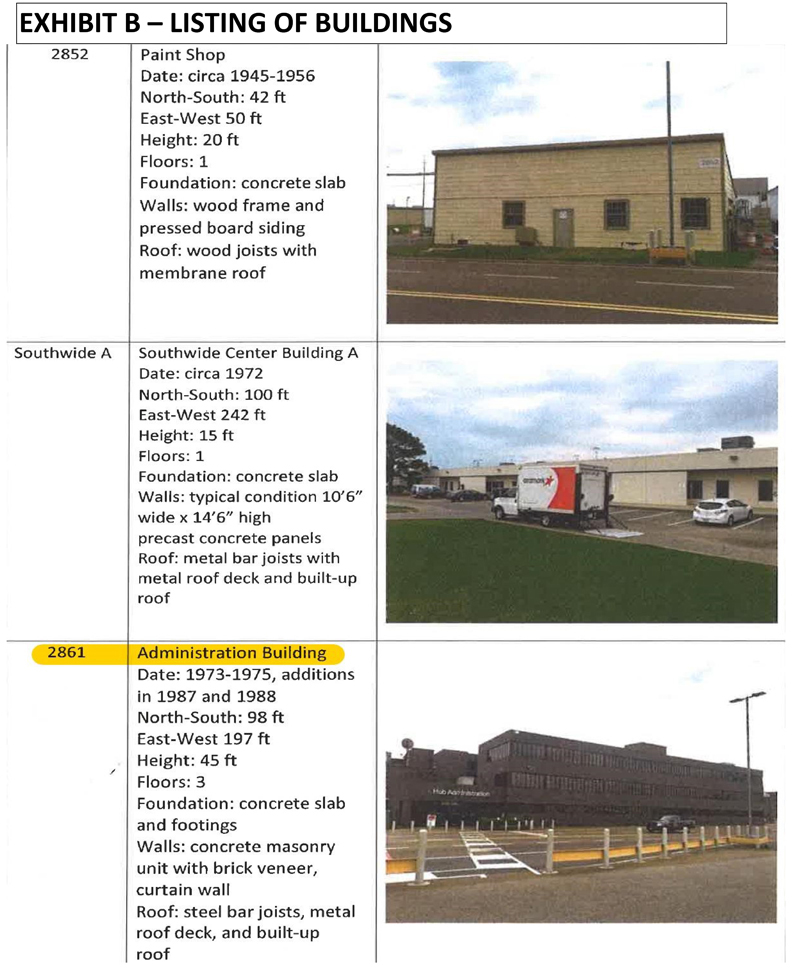 EXHIBIT B – LISTING OF BUILDINGS 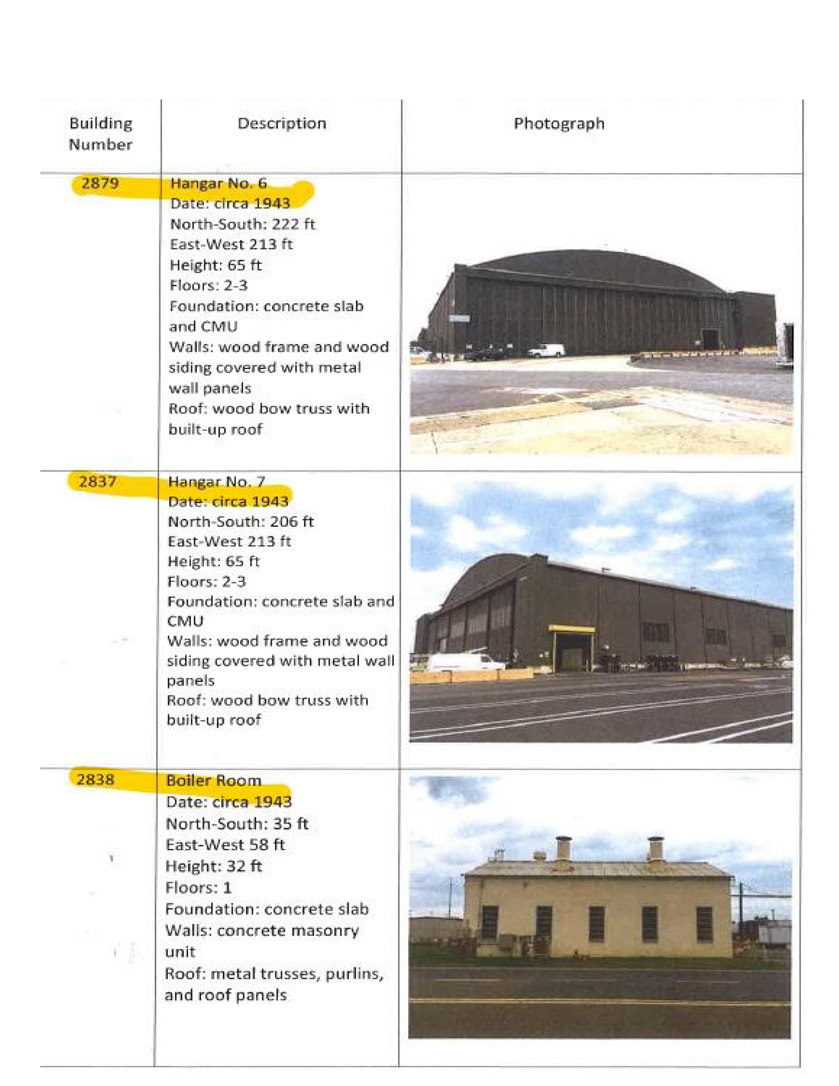 REGARDING THE FEDERAL EXPRESS TRANSFORMATION PROJECT AT

WHEREAS, the Federal Aviation Administration (FAA) has determined that the demolition of 24 outdated structures constitutes a federal undertaking because of the change to the Airport Layout Plan (ALP); and

WHEREAS, Federal Express (FedEx) proposes to deconstruct or demolish 24 outdated structures that are located in the middle of its 880-acre Hub at Memphis International Airport (MEM) in order to construct several new facilities.

WHEREAS, the Federal Aviation Administration (FAA) has determined that the demolition of these structures constitutes a federal undertaking under Section 106 of the National Historic Preservation Act because of the change to the Airport Layout Plan (ALP) that will be necessitated by the proposed development; and

WHEREAS, FAA has defined the undertaking’s Area of Potential Effects as the project site, as described in the Attached Historic and Architectural Assessment and Section 4(f) Evaluation; and

WHEREAS, FAA has determined that the undertaking will have an adverse effect on the Administration Building (2861), Hangar 6 (2879), Hangar 7 (2837), and Boiler Room (2838) (collectively, the “Hangar Complex”), which are eligible for listing in the National Register of Historic Places, and has consulted with the Tennessee Historic Preservation Officer (SHPO) pursuant to 36 CFR Part 800, the regulations implementing Section 106 of the National Historic Preservation Act (16 U.S.C. § 470f); and

WHEREAS, the Memphis-Shelby County Airport Authority (Authority), the operator of the airport and the applicant for the approval of the project, has participated in the consultation process, has specific responsibilities to carry out the terms of this Memorandum of Agreement (Memorandum) regarding the effects of the undertaking on historic properties and FAA has invited them to sign this Memorandum as an invited signatory; and

WHEREAS, in accordance with 36 CFR § 800.6(a)(l), FAA has notified the Advisory Council on Historic Preservation (ACHP) of its adverse effect determination with specified documentation, and the ACHP has chosen not to participate in the consultation; and

NOW THEREFORE, The FAA, the Tennessee Historical Commission (Commission), Fed-Ex, and the Authority agree that the undertaking will be implemented in accordance with the following stipulations in order to take into account the potential effect of the undertaking on historic properties, and that these measures shall constitute full, complete, and adequate mitigation measures under the National Historic Preservation Act and the implementing regulations of the Advisory Council on Historic Preservation (Advisory Council).

The FAA, through coordination with the Authority, Fed-Ex, and the Commission, will ensure that the following measures are carried out:

All historic preservation work carried out pursuant to this Memorandum will be performed by or under the direct supervision of a person or persons meeting at a minimum the Secretary of the Interior’s Professional Qualification Standards (48 FR 44738-9). The FAA will consult with the SHPO to determine and ensure that the preservation professionals responsible for carrying out the historic and archaeological documentation covered by this Memorandum meet the Secretary of Interior’s Standards and the professional requirements set forth in the Tennessee SHPO Standards and Guidelines for Archaeological Resource Management Studies (Revised 2008).

During the Historic and Architectural Assessment and Section 4(f) Evaluation, four sites including the Administration Building (2861), Hangar 6 (2879), Hangar 7 (2837), and Boiler Room (2838), within the Area of Potential Effects were identified as eligible for the National Register of Historic Places. FAA and the Authority have determined that it is not possible to complete the project without impacting these sites.

1. FedEx shall mitigate the adverse effects to the potentially eligible structures caused by their demolition through the completion of documentation that meets Historic American Buildings Survey (HABS) Level II documentation standards

for the eligible structures as requested by the Commission. Utilization of HABS standards is understood to meet the Secretary of the Interior’s Standards for Historical Documentation as they apply to architectural, engineering, and landscape documentation.

3. FedEx, with the assistance of the Authority, will develop and provide an architectural history and context report (AHC) for the airport. The AHC will be submitted separately from the HABS documentation and will provide a succinct and holistic history of the airport to provide context for the Hanger Complex’s historic significance. The AHC will address the history of the airport from its inception to the present with an emphasis on how and why the Hangar Complex was developed and incorporated into the war effort as well as how it has affected the transformation of the Memphis International Airport. The AHC will address growth and development patterns, which may be presented in mapped format with contextual explanations. The AHC will include current floorplan drawings of the Hanger Complex structures and may include original drawings if readily available. The AHC will utilize primary sources when available, but may rely on secondary sources as necessary.

The AHC will be approximately 20-30 pages in length, including figures and maps. It is understood that the AHC is not a survey of the airport and will not include survey information or details for individual buildings outside of the Hanger Complex. This documentation will be provided to the Commission after demolition activities. The information will also be made available to the public through its incorporation in the history section of the Authority’s website.

If, during the implementation of the project, a previously unidentified property is discovered or a previously identified historic property is affected in an unanticipated manner, all work within a minimum of 50 feet around the area of the discovery shall cease until a treatment plan can be developed and implemented. The SHPO and FAA shall be notified at the earliest opportunity and the Authority shall require its contractor to take all reasonable measures to avoid harm to the property until FAA concludes consultation with the SHPO and, to the extent appropriate, other consulting parties.

Should any party to this Memorandum object in writing within 30 days to any action taken pursuant hereto, the FAA shall consult with the party to resolve the concerns. If the FAA determines that the objection cannot be resolved, the FAA shall request further comments or recommendations of the ACHP concerning the dispute pursuant to 36 C.F.R. Part 800. Any comments on the subject of the dispute provided by the ACHP in response to such a request will be considered by the FAA in accordance with 36 C.F.R. Part 800. The FAA’s right and responsibility to carry out all actions under this Memorandum that are not the subject of the dispute will remain unchanged.

If the terms of this Memorandum are not implemented within two years of ratification, the FAA shall provide the ACHP with the opportunity to comment on the effects and propose mitigation alternatives.

This Memorandum may be terminated by any party upon 30 days written notice to the other parties sent by certified mail, postage prepaid or by facsimile transmission and addressed to the respective parties.

If one party should provide such written notice of termination, all parties will consult during the 30 days prior to termination in order to attempt to reach agreement on amendments or other actions which would avoid termination. In the event of termination, the FAA agrees to comply with the 36 CFR 800.4 through 800.6 with regard to the matters covered by this Memorandum.

This agreement shall be null and void if its terms are not carried out within 2 years from the date of execution, unless the parties agree in writing to an extension for carrying out its terms.

Execution of this Memorandum and implementation of its terms is evidence, and shall be considered as such, that FAA has afforded the ACHP and the Tennessee SHPO the opportunity to comment on the proposed project and that the FAA has taken into account the effects of said construction on historic properties.

We have reviewed the documents you submitted regarding your proposed undertaking . The HABS Level II documentation you submitted fulfills Stipulation II of the Memorandum of Agreement between our office, the Federal Aviation Administration, the Memphis-Shelby County Airport Authority, and Federal Express regarding the Federal Express Transformation Project at Memphis International Airport, ratified on September 24,2018. Demolition can proceed on these buildings. Questions and comments may be directed to Casey Lee (615 ###-###-####). We appreciate your cooperation.