MontBleu Lease Amendment No. 5 by and between the Edgewood Companies, a Nevada corporation formerly known as Park Cattle Co., and Columbia Properties Tahoe, LLC, made effective January 1, 2020

THIS MONTBLEU LEASE AMENDMENT NO. 5 is made to be retroactively effective as of this 1st day of January, 2019 on the Effective Date as defined in Article VIII hereof, by and between the Edgewood Companies, a Nevada corporation formerly known as Park Cattle Co., (“Edgewood”), as Landlord, and Columbia Properties Tahoe, LLC, a Nevada limited liability company (“CPT”), as Tenant. Edgewood, as Landlord, and CPT, as Tenant, are sometimes referred to individually as a “Party” and collectively as the “Parties.” Terms not otherwise defined herein shall have the meanings ascribed to them in the Lease (as defined below).

WHEREAS, Desert Palace, Inc. assigned all of its right, title, benefits, privileges, estate and interest in, to and under the Original Lease to CPT pursuant to an Assignment and Assumption of Lease dated June 10,2005.

WHEREAS, on or about October 1,2018, CPT adopted Accounting Standard Update No. 2014-09, Revenue from Contracts with Customers (“ASC606”), which, except as to food and other revenues that have been historically presented at retail value, affects how CPT presents in its financial statements gross revenues for complimentary rooms, beverages and entertainment tickets provided to guests, and offsets those amounts against revenue.

WHEREAS, CPT and Edgewood intend that the use of Gross Revenue for percentage rent purposes and the Cap Ex Requirement be revised and replaced with Net Revenue.

WHEREAS, the Tahoe-Douglas Visitors Authority (“TDVA”) has begun the process to obtain necessary approvals to construct a publicly owned assembly event and entertainment venue at Stateline, Douglas County, Nevada, to be located on a portion of the Premises (the “Tahoe South Events Center”).

WHEREAS, CPT and Edgewood recognize that the Tahoe South Events Center is in their mutual best interests as well as the best interests of the economy of South Lake Tahoe.

WHEREAS, the Tahoe South Events Center must be constructed and operated on land in control of TDVA and in a manner which functions cooperatively with, but independent from, CPT and Edgewood;

WHEREAS, based upon the foregoing, Edgewood and CPT have agreed to make certain modifications to the Lease as amended.

NOW, THEREFORE, in consideration of the mutual promises contained herein and other good and valuable consideration, the receipt and adequacy of which is hereby acknowledged, the Parties hereto agree as follows:

II.Wherever in the Lease the term “Gross Revenue” is used, it is replaced with the term “Net Revenue,” and for all such purposes, the term “Net Revenues” means all amounts received, whether by cash or credit, from the operation of all of the facilities and businesses on the Premises and the Enterprise now known as MontBleu, including, but not limited to, rooms, bars, restaurants, concessions, entertainment, retail, all other amounts received, and gaming, and shall be measured by Lease Year. Any future revenue sources or new revenues generated from the operation of the facilities and businesses on the Premises in future years shall be included in Net Revenues. Net Revenues shall expressly exclude: (i) proceeds from the sale, exchange or voluntary or involuntary disposition of Owner’s property which had not been held for sale; (ii) such amounts as may be received and held by Owner as security or in other special deposits; (iii) applicable excise, sales, occupancy and use taxes, or similar government taxes, duties, levies or charges collected directly from patrons or guests, or as a part of the sales price of any goods, services or displays, including gross receipts, admission, cabaret or similar or equivalent taxes; (iv) receipts from awards or sales in connection with any condemnation, from other transfers in lieu of and under the threat of any condemnation, and other receipts in connection with any condemnation; (v) proceeds of any insurance, including the proceeds of any business interruption and/or contingent business interruption insurance; (vi) discounts (including rebates, credits or charge or credit card commissions); (vii) gratuities and service charges collected for payment to employees; (viii) any credits or refunds made to customers, guests or patrons; (ix) interest income; (x) any reserve for and/or uncollectible debts as determined in accordance with generally accepted accounting principles consistently applied; and (xi) all revenues generated from complimentary rooms, food, beverage, entertainment, and other promotional allowances provided to customers at no charge.

III.Section 1.1 of the Lease is amended and restated in its entirety to read as follows:

Premises and Term of Lease

IV.Article XII of the Lease is amended by adding the following new section:

VIII.This MontBleu Lease Amendment No. 5 shall be retroactively effective as of January 1, 2019, when U.S. Bank, National Association, has given its written consent to it, as required by agreements between Landlord and U.S. Bank dated September 30,2015.

Landlord and Tenant have duly executed this MontBleu Lease Amendment No. 5 as of the Effective Date.

Beginning at a point where the Easterly right-of-way line of U.S. Highway 50 intersects the present California Nevada State Line; thence North 28°02'00" East, along said right-of-way line, a distance of 877.66 feet to the Northeasterly comer of parcel conveyed to Barneys Club Inc. by deed recorded October 3, 1960 in Book 7, Page 117, Douglas County Records, the TRUE POINT OF BEGINNING:

Thence, from a tangent which bears the last named course, along a circular curve to the right with a radius of 34.00 feet and a central angle of 90°01'23", an arc length of 53.42 feet to a point on the Southwesterly right-of-way line of the Stateline Loop Road;

Thence North 61°58'00" West, along the property boundaries of Harrah's and Barney's, a distance of 570.86 feet to the TRUE POINT OF BEGINNING. 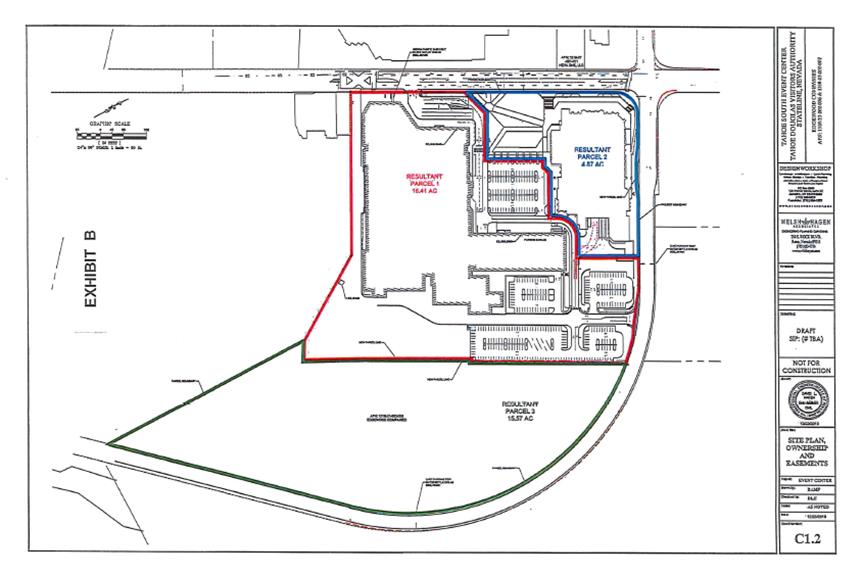