This Termination Agreement ("Agreement") is effective as of 27th December, 2019 ("Effective Date"), Cosmos Group Holdings, Inc., a Nevada corporation (“COSG”), on the one hand, and Hong Kong Healthtech Limited, a limited liability company organized under the laws of Hong Kong (“HKHL”), 深圳傅正勤教育科技有限公司Shenzhen Fu Zheng Qin Education Technology Limited (formerly known as Shenzhen Yongle Innovative Education Limited), a limited company organized under the laws of the People’s Republic of China (“SZFZQ”) and their Affiliates (together with HKHL, the “HKHL Entities”), each only, with respect to their respective obligations hereunder, on the other hand.. The parties are collectively referred to as "Parties" and individually as "Party".

Whereas, the Parties entered into the INTELLECTUAL PROPERTY OWNERSHIP AND LICENSE AGREEMENT, and any ancillary documents where applicable, dated 19th July 2019 (the "Documents") for the terns therein;

Whereas, the Parties have agreed to mutually terminate the Documents with immediate effect from their execution and delivery of this Agreement and to provide one other with a mutual release set forth below; and

Now, therefore, in view of the foregoing premises and in consideration of the mutual promises and covenants contained in this Agreement, the Parties agree as follows:

Capitalized terms used herein shall have the meaning as provided in the Documents, unless as otherwise set forth below.

2.1 Subject to the terms and conditions of this Agreement, as of the Effective Date, the Parties hereby mutually terminate the Documents and any and all rights, obligations or duties created thereunder with immediate effect.

3.2 It is understood and agreed that this is a full and final release of any and all claims described as aforesaid, including those that are now unknown, unanticipated, unsuspected and undisclosed, as well as those which are now known, anticipated, suspected, or disclosed.

3.3 Each Party warrants and represents that (1) it has the power and authority to execute, deliver and grant this release, (2) all actions necessary for the due authorization, execution and delivery of this release have been duly taken, (3) this release is a legal, valid and binding obligation of the Party granting this release, and (4) this release is enforceable in accordance with the terms of this Agreement.

3.4 Each Party granting the release hereunder will indemnify and save harmless the other Party herein from any loss, claim, expense, demand or cause of action of any hind or character through the assertion by any person of a claim or claims connected with the subject matter of this release and from any loss incurred directly or indirectly by reason of the falsity or inaccuracy of any representation herein by the Party granting the release.

5.1 This Agreement shall be governed and construed in accordance with the laws of Hong Kong without regard to principles of conflicts of law. Each party hereby irrevocably submits to the non-exclusive jurisdiction of the Hong Kong courts in respect of any suit, action or proceeding arising out of or relating to this Agreement, and irrevocably accepts for themselves and in respect of their property, generally and unconditionally, the jurisdiction of the aforesaid courts.

6.1 This Agreement may be signed in any number of copies or counterparts, each of which when so signed and delivered shall be deemed an original, but all the counterparts shall together constitute one and the same agreement.

IN WITNESS WHEREOF, the parties hereto have caused this Agreement to be executed and delivered by their duly authorized officers to be effective as of the Effective Date. 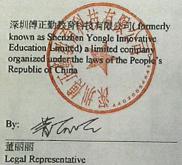