EX-10.1 2 colm-20190930x10x1.htm TAX DIFFERENTIAL ON SUPPLEMENTAL WAGES AGREEMENT Exhibit
EXHIBIT 10.1
TAX DIFFERENTIAL ON SUPPLEMENTAL WAGES AGREEMENT
This TAX DIFFERENTIAL ON SUPPLEMENTAL WAGES AGREEMENT (this “Agreement”), entered into as of November 1, 2019 (the “Effective Date”), is made by and between Columbia Sportswear Company, an Oregon corporation (together with its direct and indirect subsidiaries, successors and permitted assigns under this Agreement, the “Company”), and Franco Fogliato (“Executive”)(Executive together with the Company, the “Parties”, and each individually, a “Party”).
WHEREAS, the Company employs Executive as its Executive Vice President, Americas General Manager;
WHEREAS, the location of Executive’s employment at Avenue des Morgines 12, Geneva Business Center, Petit-Lancy, 1213 Switzerland (the “Original Jurisdiction”) was ended effective July 31, 2017 and transferred to 14375 NW Science Park Dr, Portland, OR, 97229, United States (the “Relocation Jurisdiction”) effective September 4, 2017 (the “Relocation Date”);
WHEREAS, on the Relocation Date Executive had certain awards from the Company outstanding, including the stock options, restricted stock unit awards, short-term and long-term cash awards listed on Exhibit A, attached hereto and incorporated by reference herein (the “Trailing Benefits”), which were earned in part while employed with the Company in the Original Jurisdiction and are subject to various vesting restrictions or have not yet been exercised;
WHEREAS, income tax liabilities and other applicable tax liabilities, as may be determined in the sole and absolute discretion of the Committee, are incurred by Executive as a result of the Trailing Benefits vesting or being exercised or settled (“Trailing Benefit Tax Liabilities”);
WHEREAS, the amount of such Trailing Benefit Tax Liabilities is dependent on the time spent in each jurisdiction in which Executive was located during the vesting period or prior to the time of exercise; and
WHEREAS, the Compensation Committee (the “Committee”) of the Board of Directors (the “Board”) of the Company has determined that it is in the best interests of the Company and its shareholders to provide Executive with tax differential payment(s) on foreign earned supplemental wages to ensure that Executive’s burden for the Trailing Benefit Tax Liabilities will remain at a similar level as if Executive were employed solely in the Original Jurisdiction subject to the terms of this Agreement.
NOW, THEREFORE, in consideration of the promises and mutual covenants herein and for other good and valuable consideration, the receipt and sufficiency of which is mutually acknowledged, the Parties agree as follows:
the Company (the “Tax Firm”) to complete the following on the Executive’s behalf (the “Tax Preparation Services”):
To facilitate the Tax Preparation Services and the Tax Differential Calculations, Executive agrees to provide the Tax Firm such information that the Tax Firm reasonably requires in order to perform the Tax Preparation Services and the Tax Differential Calculations in a timely fashion.

Tax Differential Calculation from the Tax Firm (each, a “Payment Date”), in each case, so long as Executive remains continuously employed by the Company from the Effective Date through each Payment Date. Notwithstanding anything in this Agreement to the contrary, all Tax Differential Payments shall be made no later than December 31 of the calendar year following the calendar year in which Executive’s U.S. Federal income tax return is required to be filed (including any extensions) for the Trailing Benefits subject to such Tax Differential Payment.

IN WITNESS WHEREOF, the Company and Executive have executed this Agreement as of the date set forth in the first paragraph. 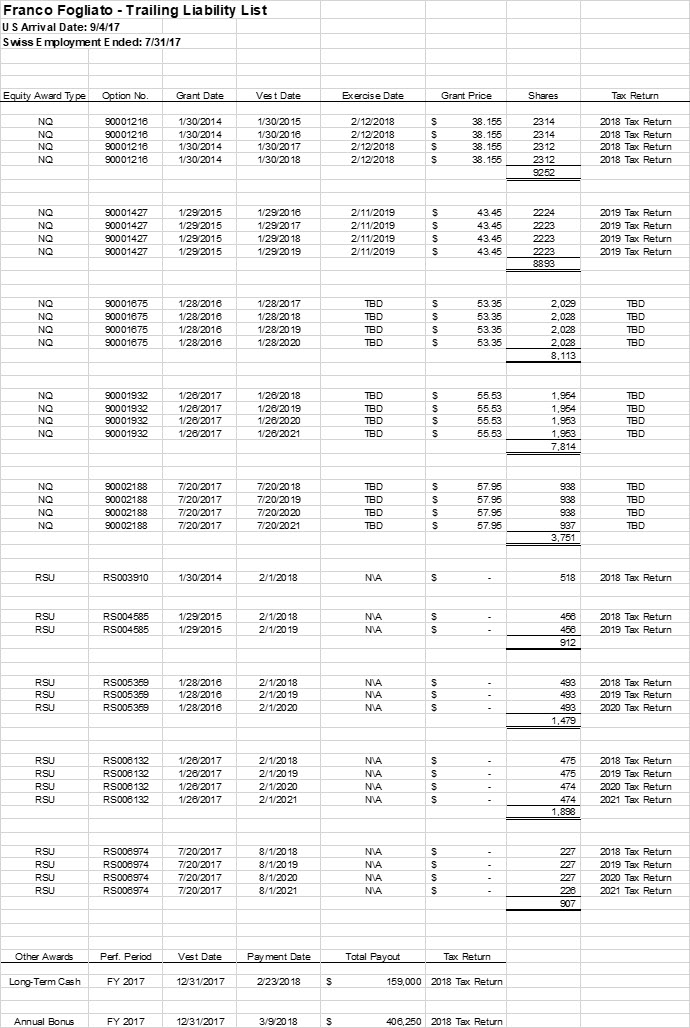