Third Amendment to the Employment Agreement, dated September 22, 2021, by and among Brookline Bancorp, Inc., Brookline Bank and Paul A. Perrault 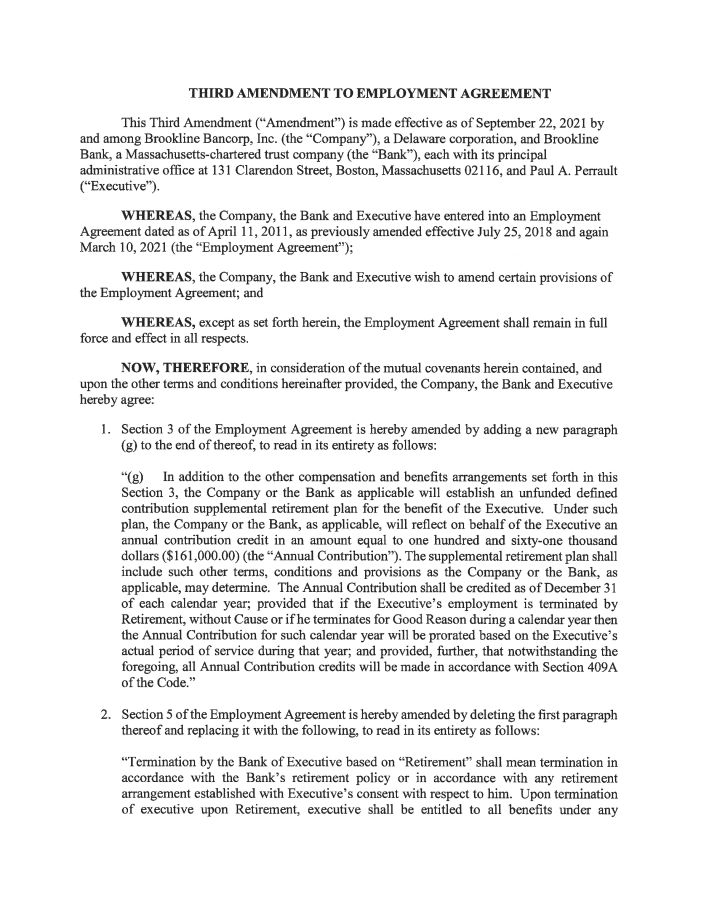 THIRD AMENDMENT TO EMPLOYMENT AGREEMENT This Third Amendment ("Amendment") is made effective as of September 22, 2021 by and among Brookline Bancorp, Inc. (the "Company"), a Delaware corporation, and Brookline Bank, a Massachusetts - chartered trust company (the "Bank"), each with its principal administrative office at 131 Clarendon Street, Boston, Massachusetts 02116, and Paul A. Perrault ("Executive"). WHEREAS, the Company, the Bank and Executive have entered into an Employment Agreement dated as of April 11, 2011, as previously amended effective July 25, 2018 and again March 10, 2021 (the "Employment Agreement"); WHEREAS, the Company, the Bank and Executive wish to amend certain provisions of the Employment Agreement; and WHEREAS, except as set forth herein, the Employment Agreement shall remain in full force and effect in all respects. NOW, THEREFORE, in consideration of the mutual covenants herein contained, and upon the other terms and conditions hereinafter provided, the Company, the Bank and Executive hereby agree: 1. Section 3 of the Employment Agreement is hereby amended by adding a new paragraph (g) to the end of thereof, to read in its entirety as follows: "(g) In addition to the other compensation and benefits arrangements set forth in this Section 3 , the Company or the Bank as applicable will establish an unfunded defined contribution supplemental retirement plan for the benefit of the Executive . Under such plan, the Company or the Bank, as applicable, will reflect on behalf of the Executive an annual contribution credit in an amount equal to one hundred and sixty - one thousand dollars ( $ 161 , 000 . 00 ) (the "Annual Contribution") . The supplemental retirement plan shall include such other terms, conditions and provisions as the Company or the Bank, as applicable, may determine . The Annual Contribution shall be credited as of December 31 of each calendar year ; provided that if the Executive's employment is terminated by Retirement, without Cause or if he terminates for Good Reason during a calendar year then the Annual Contribution for such calendar year will be prorated based on the Executive's actual period of service during that year ; and provided, further, that notwithstanding the foregoing, all Annual Contribution credits will be made in accordance with Section 409 A of the Code . " 2. Sectio n 5 of th e Employmen t Agreemen t i s hereby amende d by deleting th e first paragraph thereof and replacing it with the following, to read in its entirety as follows: "Termination by the Bank of Executive based on "Retirement" shall mean termination in accordance with the Bank's retirement policy or in accordance with any retirement arrangement established with Executive's consent with respect to him . Upon termination of executive upon Retirement, executive shall be entitled to all benefits under any 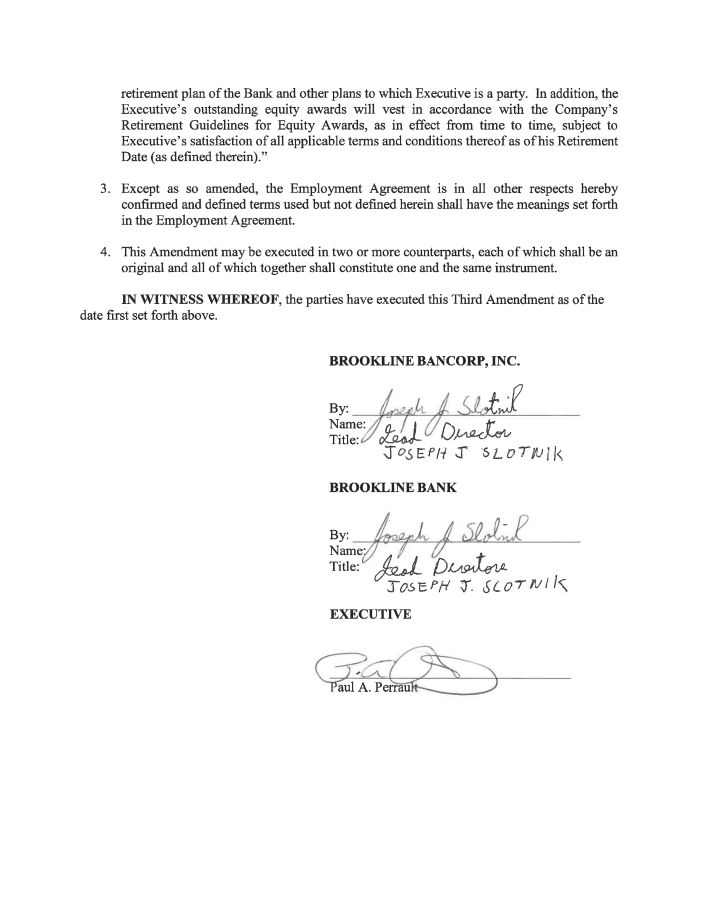 retirement plan of the Bank and other plans to which Executive is a party . In addition, the Executive's outstanding equity awards will vest in accordance with the Company's Retirement Guidelines for Equity Awards, as in effect from time to time, subject to Executive's satisfaction of all applicable terms and conditions thereof as of his Retirement Date (as defined therein) . " 3. Except as so amended, the Employment Agreement is in all other respects hereby confirmed and defined terms used but not defined herein shall have the meanings set forth in the Employment Agreement . 4. This Amendment may be executed in two or more counterparts, each of which shall be an original and all of which together shall constitute one and the same instrument . IN WITNESS WHEREOF, the parties have executed this Third Amendment as of the date first set forth above. BROOKLINE BANCORP, INC. BROOKLINE BANK e H z 1 ;su, Title: MD ro.scf>H J'. Slo - rNI '" EXECUTIVE