Settlement Agreement, dated as of February 22, 2021, by and between the United States of America, acting through the United States Attorneys Office for the Middle District of North Carolina and on behalf of the Office of Inspector General of the Department of Health and Human Services, and Bioventus LLC, through their authorized representatives

Exhibit 10.49
SETTLEMENT AGREEMENT
This Settlement Agreement (“Agreement”) is entered into between the United States of America, acting through the United States Attorney’s Office for the Middle District of North Carolina and on behalf of the Office of Inspector General of the Department of Health and Human Services (“OIG-HHS”) (collectively the “United States”), and Bioventus LLC (“Bioventus”), through their authorized representatives. Collectively, all of the above will be referred to as “the Parties.”
RECITALS
A.Bioventus is a medical technology company headquartered in Durham, North Carolina. Bioventus manufactures and supplies the Exogen Ultrasound Bone Healing System (“Exogen”) to patients, including to Medicare beneficiaries. Bioventus is enrolled as a Medicare Part B Durable Medical Equipment supplier.
B.On November 30, 2018, Bioventus made a submission pursuant to OIG-HHS’s Self-Disclosure Protocol (Protocol), and OIG-HHS accepted Bioventus into the Protocol on January 14, 2019.
C.The United States contends that Bioventus submitted or caused to be submitted claims for payment to the Medicare Program, Title XVIII of the Social Security Act, 42 U.S.C.
§§ 1395-1395lll (“Medicare”).
D.The United States contends it has certain civil claims against Bioventus arising from the conduct disclosed in its voluntary self-disclosure submission. Specifically, the United States contends that, Bioventus knowingly submitted to Medicare claims for the company’s Exogen ultrasonic osteogenic bone growth stimulators during the period from October 1, 2012 through December 31, 2018, where for such claims Bioventus sales personnel had improperly

filled out Part B of the Certificates of Medical Necessity (CMN) supporting the claims, and such claims were for items that were not reasonable and necessary for the diagnosis or treatment of illness or injury or to improve the functioning of a malformed body member (i.e., not medically reasonable or necessary) (the “Covered Conduct”).
A.In July 2019, Bioventus paid funds to Medicare pursuant to its internal review of Medicare Part B claims for certain ultrasonic bone healing devices from October 1, 2012 through December 31, 2018.
B.This Settlement Agreement is neither an admission of liability by Bioventus nor a concession by the United States that its claims are not well founded.
To avoid the delay, uncertainty, inconvenience, and expense of protracted litigation of the above claims, and in consideration of the mutual promises and obligations of this Settlement Agreement, the Parties agree and covenant as follows:
TERMS AND CONDITIONS
1.Bioventus shall pay to the United States the amount of Three Million Six Hundred Nine Thousand Eighty Seven Dollars ($3,609,087) (“Settlement Amount”), of which $2,406,058 is restitution. Of the funds paid to Medicare described in Recitals paragraph E, $2,406,058 shall be deemed a payment of part of the Settlement Amount that Bioventus agrees to pay to the United States under the terms of this Agreement. Accordingly, the total amount to be paid by Bioventus upon execution of this Agreement shall be reduced to $1,203,029 (“Net Settlement Amount”). The Net Settlement Amount will be paid within fourteen (14) business days of the Effective Date of this Agreement by electronic funds transfer pursuant to written instructions to be provided by the Office of the United States Attorney for the Middle District of North Carolina.
2

1.Subject to the exceptions in Paragraph 4 (concerning reserved claims) below, and conditioned upon the United States’ receipt of the Settlement Amount, the United States releases Bioventus, together with its current and former parent corporations; direct and indirect subsidiaries; brother or sister corporations; divisions; current or former corporate owners; and the corporate successors and assigns of any of them, from any civil or administrative monetary claim the United States has for the Covered Conduct under the False Claims Act, 31 U.S.C. §§3729– 3733; the Civil Monetary Penalties Law, 42 U.S.C. §1320a-7a; the Program Fraud Civil Remedies Act, 31 U.S.C. §§3801–3812; or the common law theories of payment by mistake, unjust enrichment and fraud.
2.In consideration of the obligations of Bioventus in this Agreement, and upon the United States’ receipt of full payment of the Settlement Amount, OIG-HHS shall release and refrain from instituting, directing, or maintaining any administrative actions seeking exclusion from Medicare, Medicaid, and other Federal health care programs (as defined in 42 U.S.C.
§1320a-7b(f)) against Bioventus under 42 U.S.C. §1320a-7a (Civil Monetary Penalties Law), or 42 U.S.C. §1320a-7(b)(7) (permissive exclusion for fraud, kickbacks, and other prohibited activities) for the Covered Conduct, except as reserved in this Paragraph and in Paragraph 4 (concerning reserved claims), below. OIG-HHS expressly reserves all rights to comply with any statutory obligations to exclude Bioventus from Medicare, Medicaid and other Federal Health care Programs under 42 U.S.C. §1320a-7(a) (mandatory exclusion) based on the Covered Conduct. Nothing in this Paragraph precludes OIG-HHS from taking action against entities or persons, or for conduct and practices, for which claims have been reserved in Paragraph 4 below.
3

1.Notwithstanding the releases given in Paragraphs 2 and 3 of this Agreement, or any other term of this Agreement, the following claims of the United States are specifically reserved and are not released:
a.Any liability arising under Title 26, U.S. Code (Internal Revenue Code);
b.Any criminal liability;
c.Except as explicitly stated in this Agreement, any administrative liability or enforcement right, including mandatory exclusion from Federal health care programs;
d.Any liability to the United States (or its agencies) for any conduct other than the Covered Conduct;
e.Any liability based upon obligations created by this Agreement; and
f.Any liability of individuals.
2.Bioventus waives and shall not assert any defenses it may have to any criminal prosecution or administrative action relating to the Covered Conduct that may be based in whole or in part on a contention that, under the Double Jeopardy Clause in the Fifth Amendment of the Constitution, or under the Excessive Fines Clause in the Eighth Amendment of the Constitution, this Agreement bars a remedy sought in such criminal prosecution or administrative action.
3.Bioventus fully and finally releases the United States, and its agencies, officers, agents, employees, and servants, from any claims (including attorney’s fees, costs, and expenses of every kind and however denominated) that Bioventus has asserted, could have asserted, or may assert in the future against the United States, and its agencies, officers, agents, employees, and servants, related to the Covered Conduct and the United States’ investigation and prosecution thereof.
4

1.The Settlement Amount shall not be decreased as a result of the denial of claims for payment now being withheld from payment by any Medicare contractor (e.g., Medicare Administrative Contractor, fiscal intermediary, carrier) or any state payer related to the Covered Conduct; and Bioventus agrees not to resubmit to any Medicare contractor or any state payer any previously denied claims related to the Covered Conduct, agrees not to appeal any such denials of claims, and agrees to withdraw any such pending appeals.
2.Bioventus agrees to the following:
a.Unallowable Costs Defined: All costs (as defined in the Federal
Acquisition Regulation, 48 C.F.R. §31.205-47; and in Titles XVIII and XIX of the Social Security Act, 42 U.S.C. §§1395–1395lll and 1396–1396w-5; and the regulations and official program directives promulgated thereunder) incurred by or on behalf of Bioventus, and its present or former officers, directors, employees, predecessors, successors, shareholders, and agents in connection with:
(1)the matters covered by this Agreement;
(2)the United States’ audit(s) and civil investigation(s) of the matters covered by this Agreement;
(3)Bioventus’ investigation, defense, and corrective actions undertaken in response to the United States’ audit(s) and civil investigation(s) in connection with the matters covered by this Agreement (including attorney’s fees);
(4)the negotiation and performance of this Agreement; and
(5)the payment Bioventus makes to the United States pursuant to this Agreement,
5

Any payments due after the adjustments have been made shall be paid to the United States pursuant to the direction of the Department of Justice and/or the affected agencies. The United States reserves its rights to disagree with any calculations submitted by Bioventus or any of its subsidiaries or affiliates on the effect of inclusion of Unallowable Costs (as defined in this Paragraph) on Bioventus or any of its subsidiaries or affiliates’ cost reports, cost statements, or information reports.
i.Nothing in this Agreement shall constitute a waiver of the rights of the United States to audit, examine, or re-examine Bioventus’ books and records to determine that no Unallowable Costs have been claimed in accordance with the provisions of this Paragraph.
1.Bioventus agrees to cooperate fully and truthfully with the United States’ investigation of individuals and entities not released in this Agreement. Upon reasonable notice, Bioventus shall encourage, and agrees not to impair, the cooperation of its directors, officers, and employees, and shall use its best efforts to make available, and encourage, the cooperation of former directors, officers, and employees for interviews and testimony, consistent with the rights and privileges of such individuals. Bioventus further agrees to furnish to the United States, upon request, complete and unredacted copies of all non-privileged documents, reports, memoranda of interviews, and records in its possession, custody, or control concerning any investigation of the Covered Conduct that it has undertaken, or that has been performed by another on its behalf.
2.This Agreement is intended to be for the benefit of the Parties only. The Parties do not release any claims against any other person or entity, except to the extent provided for in Paragraph 11 (waiver for beneficiaries paragraph), below.
3.Bioventus agrees that it waives and shall not seek payment for any of the health care billings covered by this Agreement from any health care beneficiaries or their parents,
7 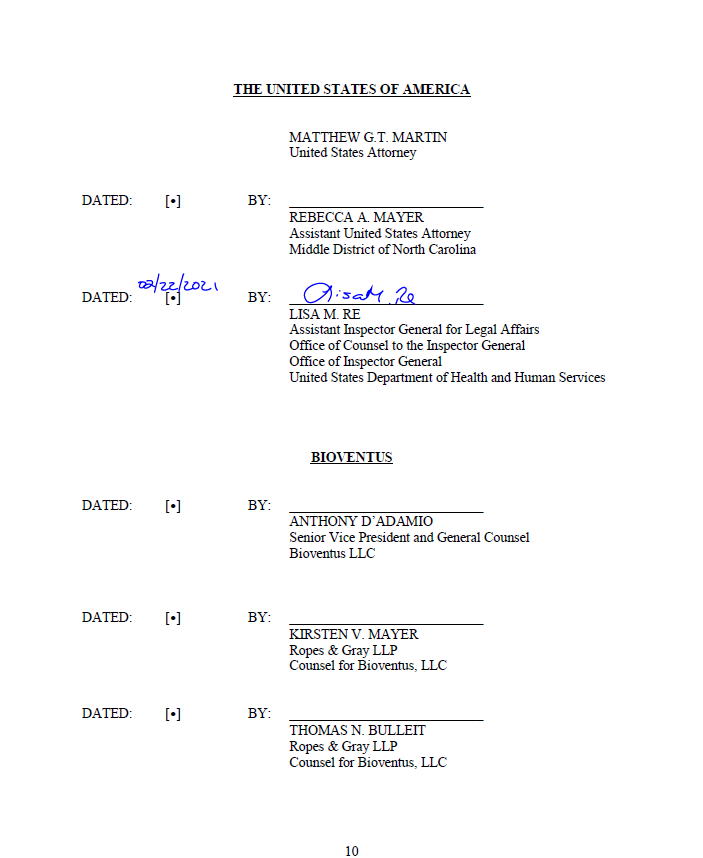 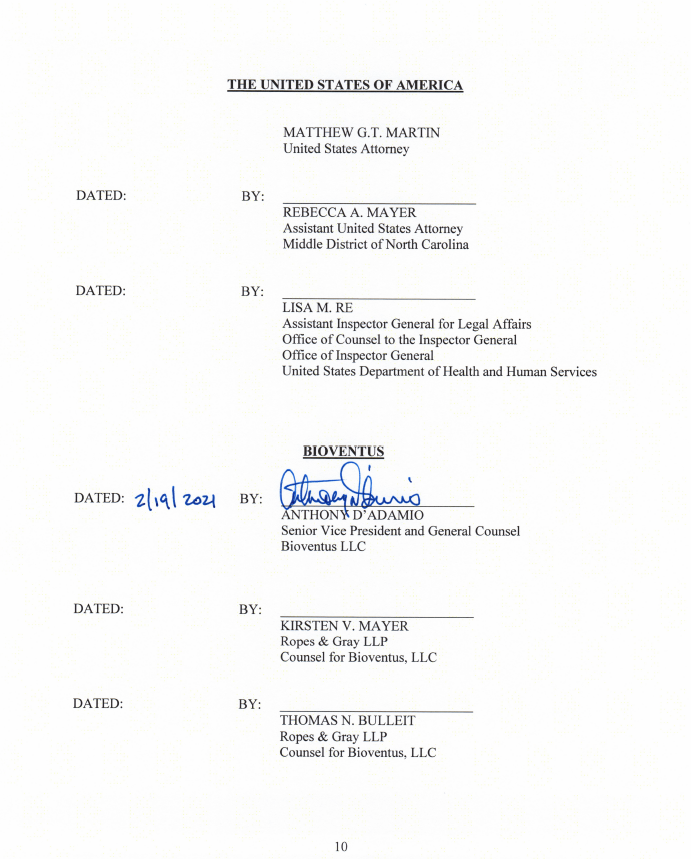 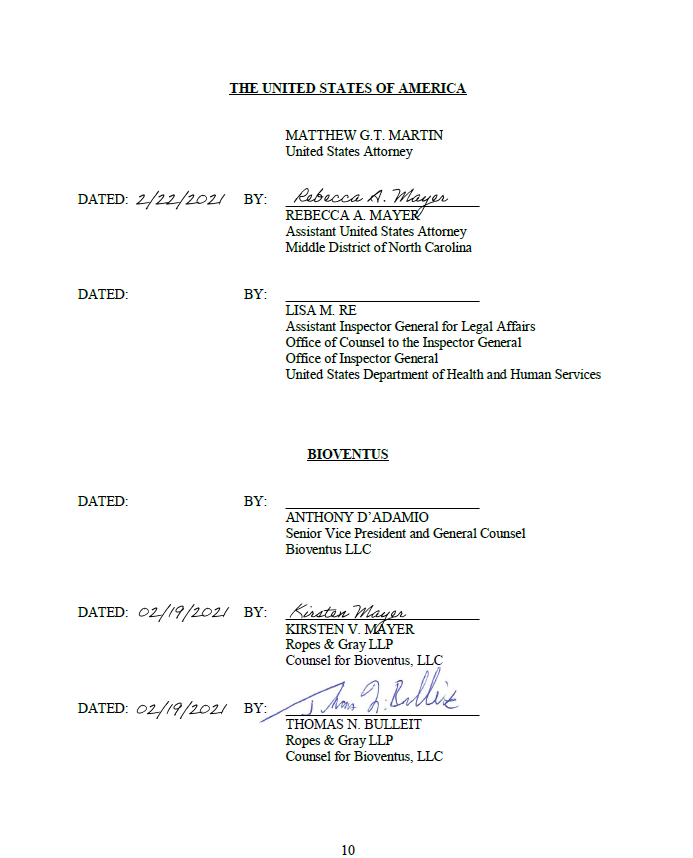