This Sponsored Research Agreement is entered into as of the date of last signature below, by and between The Regents of the University of California, on Behalf of its Los Angeles Campus, having an address at 10889 Wilshire Blvd, Suite 920 Los Angeles, CA 90095-7191 (“University”), and NewHydrogen, Inc., a wholly owned subsidiary of BioSolar, Inc., having an address at 27936 Lost Canyon Road, Suite 202, Santa Clarita, CA 91387 (“Sponsor”).

The cost to Sponsor for University’s performance hereunder will be $150,552.

In the event that University purchases supplies or equipment hereunder, title to such supplies and equipment will vest in University.

This Agreement will be governed by the laws of the State of California, United States of America, without regard to the conflict of laws provisions thereof.

Whenever any notice is to be given hereunder, it will be in writing and sent to the attention of the authorized representative for the receiving party indicated below (hereinafter “Authorized Representative”) by certified mail or overnight courier, at following address:

According to the United States Environmental Protection Agency (EPA), in 2018 alone, around 6,700 million metric tons of CO2 were emitted into the atmosphere from the consumption of fossil fuels. The energy and environmental crises caused by CO2 emission have led to the acceleration in the development of alternative clean energy sources1-5. Hydrogen has received a lot of attention as a green alternative to fossil fuels. In addition, hydrogen has a much larger specific energy of 141.86 MJ/kg (higher heating value) than typical commercial fossil fuels. For example, natural gas has a specific energy of 53.6 MJ/kg6. As of 2019, roughly 70 million tons of hydrogen were produced annually for various fields, including transportation, chemical engineering, and other industrial needs.

There are two primary sources for industrial hydrogen production: fossil fuels and renewable sources7. Unfortunately, more than 90% of current hydrogen production is from fossil fuels through natural gas reforming (Fig. 1). The hydrogen generated this way contains contaminants (CO, NOX, etc.), which is not only a problem for the environment, but can also impair hydrogen usage, e.g., CO is known to poison the Pt catalyst in the fuel cell system. Renewable hydrogen production, which primarily features the water electrolysis, can deliver H2/O2 with very high purity (up to 99% or more) with no pollutants generated. The alkaline electrolyzer8 and acidic proton exchange membrane (PEM) based electrolyzers have a similar share in the current water electrolyzer market. The PEM electrolyzer shows higher efficiency, lower specific energy consumption, and produces hydrogen of higher purity than alkaline water electrolyzers, and hence is more environmentally friendly. More importantly, the PEM water electrolyzer offers high dynamic ranges (0-100% production range can be reached within less than 50 ms), which is of particular interest to use with transient renewable energy sources and to integrate with smart grids.

However, PEM electrolytic hydrogen production cost is 10.30 $/kg compared to 2.27 $/kg of gas reforming7. The cost of electricity contributes to over 50% of hydrogen production costs in electrolyzers. Hence reducing the electricity (energy) consumption in water electrolysis is the key to cost reduction. Water electrolysis consists of two half-reactions, hydrogen evolution (HER) at the cathode and oxygen evolution (OER) at the anode. The water splitting processes are essentially constrained by the thermodynamically unfavorable OER at the anode. Therefore, efforts in water electrolysis efficiency improvement have mainly focused on electrocatalytic anodic materials. In addition, because of the highly acidic reaction environment in PEM (close to pH=0), only precious metals (PM) can survive such a harsh environment. A typical PEM water electrolyzer uses Pt or Pd for HER at the cathode and Ru/Ir oxides for OER at the anode, which also contributes to the higher cost of the PEM system.

The research goal for this Sponsored Research Project is to design earth-abundant OER catalysts for PEM electrolyzers with outstanding performance in all aspects, including low overpotential, high current density, and high stability. The success in developing such high-performance OER catalysts can greatly advance water electrolyzer technology, potentially bring down its hydrogen production cost to comparable to gas reforming and enable its wide adoption for renewable energy adaptation and environmental sustainability.

2.1 Mechanism and Intermediates during the Acidic OER Process

Understanding the reaction mechanism and the source of the catalyst instability is critical for catalyst design. A typical OER process contains four steps (Scheme 1), where * represents the active sites on the catalyst surface, and O*, OH*, and OOH* represent the adsorbed intermediates on the catalyst surface. Kinetics for Ir/C or IrO2/C is complicated because the OER mechanism can change upon different current density, and the instability of IrO2 under OER conditions contributes to the challenge 9-10. During the OER process, the lattice oxygen in IrO2 can take part in the reaction and leaves vacancies in the lattice, which is an irreversible process. As the reaction continues, the crystal structure may collapse, leading to the failure of the catalyst11. This stability issue is critical in OER catalyst design, as acidic conditions naturally ruled out all non-PM catalysts. However, in the studies of OER catalysts, it is found that, among all typical earth-abundant acidic OER catalysts, Co3O4 showed relatively better stability and low overpotential12. Interestingly, it is suggested that although Co3O4 also experiences a lattice oxygen oxidation process, Co3O4 is able to absorb water molecules to refill its oxygen vacancies through deprotonation and maintain the crystal structure13. However, the activity of the Co3O4 is fairly low.12, 14 Our strategy is to modulate the electronic structure of Co3O4 by doping/introducing foreign transition metal atoms (M: M can be Fe, Ni, Mn, Cu, Zn, etc.) into the Co3O4 structure, lowering the overpotential needed for OER while taking advantage of the stable structure it offers.

Co3O4 structure belongs to the class of spinel structures. Spinel structures are a kind of oxides with AB2O4 chemical formula, in which oxygen ions are of cubic closest packing with A2+ and B3+ filled in tetrahedral (Td) and octahedral (Oct) vacancies, separately (Fig. 2A). Co3O4 is of typical spinel structure with Co2+ and Co3+ filled in tetrahedral and octahedral vacancies, separately ([Co2+]1[Co3+]2O4). Based on previous studies, Co will experience a reversible amorphization process during the OER. The percentage of Co occupying octahedral sites is crucial for high activity16-17, thereupon modulating the Co2+/Co3+ (or CoTd/CoOct) ratio is a feasible way to promote the acidic OER performance18-19. Here, we propose an ion-substitution strategy to precisely control the Co2+/Co3+ ratio while keeping Co3+ occupation in the spinel structures: partially or fully replace the Td site ions (Blue balls in Fig. 2A) with Mn2+, Ni2+, Zn2+, etc. through a simple one-pot hydrothermal synthetic method. In this way, the material’s electronic structure can be designed to better suit the OER environment with optimal OER intermediates’ binding energy. Moreover, adding a second metal in the cobalt oxide structure may bring better electronic properties (i.e., electron conductivity13), which is fundamentally beneficial to electrocatalysis.

Recently, we successfully synthesized the Co3O4 nano-needle arrays with a very high surface area (Fig. 2B-C). According to linear sweeping voltammetry (LSV) studies, this material showed an overpotential of 470 mV at 100 mA/cm2, whose performance is among the best acidic OER earth-abundant catalysts. The Co3O4 nano-needle arrays can be an ideal starting point to explore the compositional modification strategy for higher OER activity and stability. In addition to the CoTd/CoOct ratio control, we will also explore the optimal Co/M ratio to optimize both catalytic activity and acid-resistance. 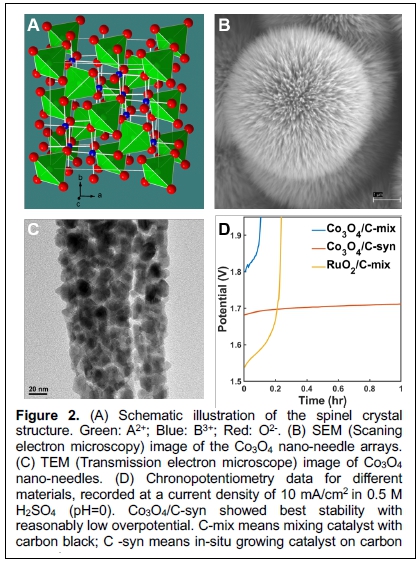 As shown in Fig. 3, a hydrothermal approach will be used to tune the doping concentration of M in Co3O4 by modulating the feeding precursor concentrations. The morphology, crystal structure, and composition of the synthesized M-Co3O4 will be characterized by SEM, TEM, X-ray diffraction (XRD), and inductively coupled plasma-atomic emission spectroscopy (ICP-AES). The valence of the metal ions (both Co and M) will be examined by X-ray photoelectron spectroscopy (XPS) and X-ray absorption spectroscopy (XAS) studies. The catalytic performance of the M-Co3O4 will be evaluated using a rotating disk electrode (RDE, half cell) in acidic media, and the best catalyst systems will be examined in the full cell (H-cell) setting.

In addition to the intrinsic catalytic property, substrate choice also plays a vital role in catalysis. OER mainly focuses on carbon-based substrates, including carbon black, carbon nanotube, graphene oxide (GO), etc. However, simply physically mixing the catalyst with carbon support does little for OER activity or stability (Fig.2D Co3O4/C-mix). Our preliminary studies showed that the in-situ growth of Co3O4 directly on carbon could improve both activity and stability (Fig. 2D Co3O4/C-syn), possibly by forming a Co-O-C bridge bond that promotes the covalent electron transfer from the carbon support to the oxide. Meanwhile, by establishing the Co-O-C bridge bond, the carbon atoms on the carbon support surfaces adjacent to the oxide nanoparticles will present substantial positive charge density, facilitating the OER process on the catalyst’s surface.

To this end, we will explore different carbon substrates (including active carbon, reduced graphene oxide and carbon nanotubes, etc.) to identify the best substrate choice for M-Co3O4 for better stability, higher catalyst loading, and lower overpotential. This will be achieved by feeding various carbon substrates simultaneously with the precursors into the reaction vessel, wherein the substrates can then serve as heterogeneous nucleation sites for the growth of M-Co3O4.

In acidic conditions, oxides still suffer from dissolving problems since they will react with acid. One standard method to mitigate this problem is to coat the material with several layers of carbon or TiO2 at a microscale22-23. The carbon coating can also modulate the electron density and the electronic potential distribution on the carbon surface for better electrocatalytic properties. This method can also be applied to OER systems (Fig. 4)24-25. After coating, the catalyst lifetime may be significantly promoted because it prevents the large-scale contact between the core material and the acid to some extent. However, this should be used with great care to avoid blocking all the active surface sites. 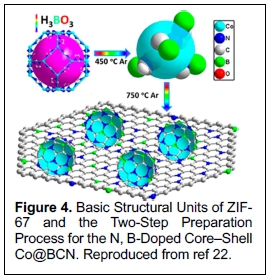 Another effective approach to realize this goal is superacid surface decoration. Solid superacid is a kind of material with stronger acidity than sulfuric acid, providing more Lewis acidic sites for better hydroxyl group (-OH) affinity. Typical superacid structures are shown in Scheme 2. Li et al. synthesized the TiO2-SnO2/SO42- material for outstanding methanol oxidation activity26. With this surface engineering, the surface electron structure can be modified to help the catalyst adsorb reaction intermediates generated during the OER process. More importantly, the catalyst is expected to have higher acid resistivity because of the acid-preprocess on the surface. The acid-preprocess can be readily achieved by simply mixing the material with the acid and calcinate, which is fully scalable industrially.

Task 1: Tuning the crystal structure and composition of transition metal-doped Co3O4 for optimized activity and stability of the catalysts (6 months)

Deliverable: Transition metal-doped Co3O4 (M-Co3O4) with comparable OER activity to Ir oxides in acidic medium. It is expected that the M-doped Co3O4 will also show much-improved stability in acid compared to IrO2 by design.

Task 2: Modify the support-catalyst interface for improved stability (6 months). If necessary or time permissible, we will also explore the surface coating approach for stability enhancement.

Deliverable: Develop in-situ growth of the M-Co3O4 directly on carbon-supports to enhance the catalyst stability as well as activity.

Checks will be made payable to The Regents of the University of California and will be sent to: