License Agreement, by and between MIL 21E, LLC and Beam Therapeutics Inc., dated as of June 25, 2019

WHEREAS, Licensor, or its affiliate, has leased certain space located at 21 Erie Street, Cambridge, MA 02139 (the “Building”) through a lease agreement (the “Lease”) between Licensor and BMR-21 Erie Street, LLC (“Landlord”); and

WHEREAS, Licensee desires to use certain space and services, as set forth below, for research and development, laboratory research and office use, and Licensor desires to grant a license to Licensee for such use.

For good and valuable consideration, the receipt and legal sufficiency of which are hereby acknowledged, accepted and agreed to, the parties agree as follows:

Notwithstanding anything to the contrary contained in this Section 14, the provisions of this Section 14 shall not apply to (and Licensor consent shall not be required in connection with,) the following transfers: (1) transfers to an entity into or with which Licensee is merged or consolidated, or (2) transfers to any entity whic4 purchases all or substantially all of Licensee’s voting stock, partnership interests or other membership interests, or (3) transfers to an entity to which all or substantially all of Licensee’s assets are transferred (the transferee in clauses (1), (2) or (3) being referred to as a “Licensee’s Successor”); or (4) transfers (including, without limitation, subleases or other occupancy agreements) to any entity which controls or is controlled by Licensee or is under common control with Licensee (the transferee in clause (4) being referred to as a “Licensee Affiliate”); provided however, Licensee shall provide thirty (30) day advance written notice to Licensor prior to any such transfer and, further provided that in any of such events:

LICENSEE UNDERSTANDS AND ACKNOWLEDGES THAT RIGHTS UNDER THIS AGREEMENT ONLY CONSTITUTE A LICENSE FOR USE OF THE LICENSED PREMISES AND DO NOT INVOLVE THE GRANT OF ANY INTEREST IN REAL ESTATE. LICENSEE SPECIFICALLY DISCLAIMS ANY RIGHTS TO SUMMARY PROCESS AND, PROVIDED THAT, LICENSOR COMPLIES WITH ALL OBLIGATIONS (INCLUDING WITHOUT INVITATION NOTICE AND CURE REQUIREMENTS) HEREUNDER, EXPLICITLY PERMITS LICENSOR TO USE SELF-HELP REMEDIES PROVIDED THAT SUCH SELF-HELP REMEDIES DO NOT BREACH THE PEACE.

IN WITNESS WHEREOF, Licensor and Licensee have duly executed this Agreement as of the day and year first above written. 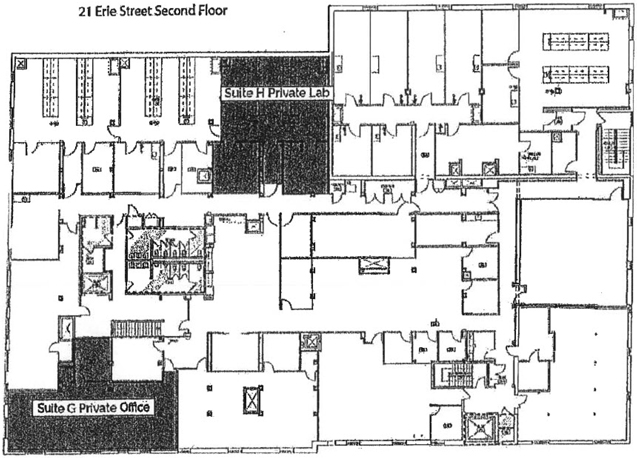 Emergency Procedures: A copy of 21 Brie Street emergency procedures and online access will be provided at the start of occupancy.

The following services are not provided and/or are not included in License. When available, these services can be provided under a separate agreement with different terms.

1.1.    Licensee shall, at its own cost and expense, procure and maintain during the Term the following insurance for the benefit of Licensee and Landlord (as their interests may appear) with insurers financially acceptable and lawfully authorized to do business in the state where the Licensed Premises are located:

(a)    Commercial General Liability insurance on a broad-based occurrence coverage form, with coverages including but not limited to bodily injury (including death), property damage (including loss of use resulting therefrom), premises/operations, personal and advertising injury, and contractual liability with limits of liability of not less than $2,000,000 for bodily injury and property damage per occurrence, $2,000,000 general aggregate, which limits may be met by use of excess and/or umbrella liability insurance provided that such coverage is at least as broad as the primary coverages required herein.

(b)    Commercial Automobile Liability insurance covering liability arising from the use or operation of any vehicle, including those owned, hired or otherwise operated or used by or on behalf of Licensee. The coverage shall be on a broad-based occurrence form with combined single limits of not less than $1,000,000 per accident for bodily injury and property damage.

(c)    Commercial Property insurance covering property damage to the full replacement cost value and business interruption. Covered property shall include all of Licensee’s improvements in the Licensed Premises and Licensee’s property including personal property, furniture, fixtures, machinery, equipment, stock, inventory and improvements and betterments, which may be owned by Licensee or Licensor and required to be insured hereunder, or which may be leased, rented, borrowed or in the case custody or control of Licensee, or Licensee’s agents, employees or subcontractors. Such insurance shall be written on an “all risk” of physical loss or damage basis including the perils of fire, extended coverage, electrical injury, mechanical breakdown, windstorm, vandalism, malicious mischief, sprinkler leakage, back-up of sewers or drains, flood, earthquake, terrorism and such other risks Licensor may from time to time designate, for the full replacement cost value of the covered items with an agreed amount endorsement with no co-insurance. Business interruption coverage shall have limits sufficient to cover Licensee’s lost profits and necessary continuing expenses, including License Fees due Licensor under the Agreement. The minimum period of indemnity for business interruption coverage shall be twelve (12) months plus twelve (12) months’ extended period of indemnity.

(e)    Medical malpractice insurance at limits of not less than $1,000,000 each claim during such periods, if any, that Licensee engages in the practice of medicine at the Licensed Premises or conducts clinical trials on humans.

(f)    Pollution Legal Liability insurance is required if Licensee stores, handles, generates or treats Hazardous Materials, as determined solely by Licensor, on or about the Licensed Premises. Such coverage shall include bodily injury, sickness, disease, death or mental anguish or shock sustained by any person; property damage including physical injury to or destruction of tangible property including the resulting loss of use thereof, clean-up costs, and the loss of use of tangible property that has not been physically injured or destroyed; and defense costs, charges and expenses incurred in the investigation, adjustment or defense of claims for such compensatory damages. Coverage shall apply to both sudden and non-sudden pollution conditions including the discharge, dispersal, release or escape of smoke, vapors, soot, fumes, acids, alkalis, toxic chemicals, liquids or gases, waste material or other irritants, contaminants or pollutants into or upon land, the atmosphere or any watercourse or body of water. Claims-made coverage is permitted, provided the policy retroactive date is continuously maintained prior to the commencement date of this agreement, and coverage is continuously maintained during all periods in which Licensee occupies the Licensed Premises. Coverage shall be maintained with limits of not less than $1,000,000 per incident with a $2,000,000 policy aggregate and for a period of two (2) years thereafter.

1.2.    The insurance required of Licensee shall be with companies at all times having a current rating of not less than A- and financial category rating of at least Class VII in “A.M. Best’s Insurance Guide” current edition. Licensee shall obtain for Licensor from the insurance companies/broker or cause the insurance companies/broker to furnish certificates of insurance evidencing all coverages required herein to Licensor. Licensor reserves the right to require complete, certified copies of all required insurance policies including any endorsements. No such policy shall be cancelable or subject to reduction of coverage or other modification or cancellation except after twenty (20) days’ prior written notice to Licensor from Licensee or its insurers (except in the event of non-payment of premium, in which case ten (10) days’ written notice shall be given). All such policies shall be written as primary policies, not contributing with and not in excess of the coverage that Licensor may carry. Licensee’s required policies shall contain severability of interests clauses stating that, except with respect to limits of insurance, coverage shall apply separately to each insured or additional insured. Licensee shall, at least ten (10) days prior to the expiration of such policies, furnish Licensor with renewal certificates of insurance or binders. Licensee agrees that if Licensee does not take out and maintain such insurance, Licensor may (but shall not be required to) procure such insurance on Licensee’s behalf and at its cost to be paid by Licensee as part of its License Fee. Commercial General Liability, Commercial Automobile Liability, Umbrella Liability and Pollution Legal Liability insurance as required above shall name Licensor, Landlord, BioMed Realty, L.P., BioMed Realty, LLC, and BRE Edison L.P., and their respective officers, employees, agents, general partners, members, subsidiaries, affiliates and Lenders (“Landlord Parties”) as additional insureds as respects liability arising from work or operations performed by or on behalf of Licensee, Licensee’s use or occupancy of the Licensed Premises, and ownership, maintenance or use of vehicles by or on behalf of Licensee.

1.3.    In each instance where insurance is to name Landlord Parties as additional insureds, Licensee shall, upon Licensor’s written request, also designate and furnish certificates evidencing such Landlord Parties as additional insureds to (a) any lender of Licensor or Landlord holding a security interest in the Building, (b) the landlord under any lease where under Landlord is a tenant of the real property upon which the Licensed Premises is located if the interest of Landlord is or shall become that of a tenant under a ground lease rather than that of a fee owner and (c) any management company retained by Licensor or Landlord to manage the Building.

1.4.    Licensee assumes the risk of damage to any fixtures, goods, inventory, merchandise, equipment and leasehold improvements, and Licensor and Landlord shall not be liable for injury to Licensee’s business or any loss of income therefrom, relative to such damage, all as more particularly set forth within the Agreement. Licensee shall, at Licensee’s sole cost and expense, carry such insurance as Licensee desires for Licensee’s protection with respect to personal property of Licensee or business interruption.

1.5.    Licensee and its insurers hereby waive any and all rights of recovery against the Landlord Parties with respect to any loss, damage, claims, suits or demands, howsoever caused, that are covered, or should have been covered, by valid and collectible workers’ compensation, employer’s liability, and other liability insurance required to be carried by Licensee pursuant to this Exhibit 3, including any deductibles or self-insurance maintained thereunder. If necessary, Licensee agrees to endorse the required workers’ compensation, employer’s liability and other liability insurance policies to permit waivers of subrogation as required hereunder and hold harmless and indemnify the Landlord Parties for any loss or expense incurred as a result of a failure to obtain such waivers of subrogation from insurers. Such waivers shall continue so long as Licensee’s insurers so permit. Any termination of such a waiver shall be by written notice to Licensor, containing a description of the circumstances hereinafter set forth in this Exhibit 3. Licensee, upon obtaining the policies of workers’ compensation, employer’s liability and other liability insurance required or permitted under this Exhibit 3, shall give notice to its insurance carriers that the foregoing waiver of subrogation is contained in this Exhibit 3. If such policies shall not be obtainable with such waiver or shall be so obtainable only at a premium over that chargeable without such waiver, then Licensee shall notify Licensor of such conditions.

1.6.    Licensor may require insurance policy limits required under the Agreement to be raised to conform with requirements of Landlord’s or Licensor’s lender.

1.7.    The provisions of this Exhibit 3 shall survive the expiration of earlier termination of the Agreement. 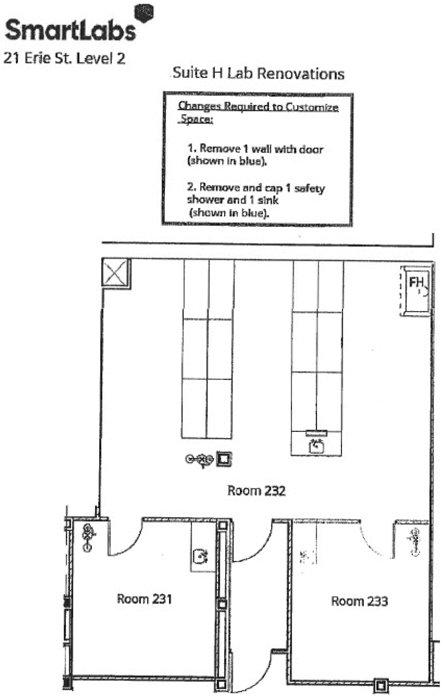