NOW, THEREFORE, in consideration of the mutual promises of the parties to the Agreement, it is hereby agreed as follows:

4.Extent of Services.   President shall devote his full time, attention and energy to the business of Bank and shall not, during the term of this Agreement, be engaged in any other business activities, unless such activities are reasonably determined by the Board of Directors of Bank not to be in competition or in conflict with the commercial banking business of Bank.

(b)If the President’s employment is terminated by the Bank without Cause or by the President for Good Reason, the President shall be entitled to receive (i) the Accrued Amounts and (ii) the Adjusted Base Compensation, together with all Incentive Bonuses, for the remainder of the term of this Agreement.

6.Base Compensation.   As regular compensation for President's services hereunder, Bank shall pay President an annual base salary of Two Hundred Sixty Thousand Dollars and 00/100 ($260, 000.00) during each year of the term hereof, payable in equal installments not less frequently than bi-weekly (herein called "Base Compensation").

Following the end of each year of this Agreement and within thirty (30) days after the release of the United States Bureau of Labor Statistics of the figures for such year, Bank shall pay to the President the amount of any additional compensation to which he is entitled as a result of such cost-of-living adjustment.

8.Incentive Bonus.   As an incentive to President for his continuing services and contributions to the growth and profitability of Bank, President shall be paid, in addition to his Adjusted Base Compensation, an Incentive Bonus as follows:

(a)Subject to the quarterly adjustments at Section 9 below, an amount equal to two percent (2%) of current net profits of the Bank after taxes or Two Hundred and Fifty Thousand Dollars ($250,000.00) whichever is less.  However such Incentive Bonus is subject to a minimum payment of $50,000 per year after all quarterly adjustments are computed pursuant to Section 9 below. The maximum amount shall be subject to review by the Board of Directors of Bank annually and appropriate adjustments shall then be made.

(d)The Incentive Bonus shall be adjusted as follows based on the Bank’s quarterly Efficiency Ratio:

For purposes of this Section 8, the ROA, ROE, Total Adversely Classified Items to Tier 1 Capital, Allowance for Loan and Lease Losses and Efficiency Ratio shall all be derived from any report of management submitted to the Board of Directors at the Board Meeting immediately preceding the date of any adjustment.  If any dispute arises as to the calculations of any of such figures, the Compensation Committee, subject to Board approval, shall make the sole determination of such figures using whatever resources the Committee shall deem reasonably necessary.  Attached to this Agreement and made a part hereof by this reference as Exhibit A, is a worksheet, which shall be used by the Bank to calculate the Incentive Bonus of the President.

10.Other Compensation or Benefits.   In addition to the Adjusted Base Compensation and Incentive Bonus and any other compensation provided hereunder, Bank shall provide President with the following:

(b)A health insurance, an accident insurance and disability insurance of a type and in an amount generally made available by Bank to its executive employees, at Bank's sole cost and expense;

(d)A motor vehicle, at Bank's sole cost and expense, together with comprehensive insurance including public liability, in amounts not less than the amount required by law.  All reasonable operating expenses shall be paid by Bank; and

(e)A Survivor Income Plan with a death benefit of $1,060,606.00 that is or will be made generally available to Bank's executive employees, at Bank's sole expense and cost.

11.Business Expenses.   Bank shall pay or reimburse President upon submission of an itemized account by him for all reasonable business expenses incurred by President in promoting, pursuing or otherwise furthering the business of Bank, including, but not limited to expenses for travel, meals, hotel accommodations, entertainment, gifts and the like.

12.Payments Following Disability.   Upon the permanent disability of the President, Bank shall pay to the President, or his assigns, the Adjusted Base Compensation, together with all Incentive Bonuses, for the remainder of the term of this Contract.

13.Successors and Assigns.   This Agreement and all the terms and conditions hereof shall be binding upon and inure to the benefit of the Bank, including any successor entity to Bank by liquidation, merger, consolidation, reorganization, sale of assets or otherwise, and to the President, and when applicable, to his heirs, successors and assigns.

14.Retirement Plans.   Employee may participate in any retirement plan of Bank and to receive payments thereunder which includes a Supplemental Executive Retirement Plan (“SERP”) which pays out for a period of 15 years the amount of $150,000 per annum after 10 years from the date of SERP contract, at the Bank’s sole expense and cost, which benefit is generally made available to the Bank’s executive employees, as described in the attached Exhibit B.

15.Non-Assumption.   The services to be performed by President under this Agreement are personal to him, and may not be assumed by any other party except with Bank's prior written consent.

16.Entire Agreement.   The making and execution of this Agreement by the parties hereto have been induced by no representations, statements, warranties or agreements other than those expressed herein.  This Agreement embodies the entire understanding of the parties, and there are no further or other agreements or understandings, written or oral, in effect between the parties relating to the subject matter hereof, unless specifically referred to herein by reference.

17.Amendments.   This Agreement and any term hereof may be changed, waived, discharged, or terminated only by an instrument in writing signed by the party against whom enforcement of such change, waiver, discharge or termination is or would be sought and without the necessity of additional consideration.

18.Notices.   All communications and notices hereunder shall be deemed to have been properly given or served for all purposes when personally delivered to the party to whom it is directed, or in lieu of such personal service, if received by certified or registered United States mail, postage prepaid, at the following addresses:

Either party may change the address provided above by giving written notice of such change to the other party as herein provided.

20.Law.   This Agreement shall be governed under and construed in accordance with the law of Guam.

21.Attorney's Fees.   In the event of any action, suit or proceeding brought under or in connection with this Agreement, the prevailing party therein shall be entitled to recover, and the other party thereto agrees to pay, costs and expenses in connection therewith including reasonable attorney's fees, disbursements and expenses.

22.Board Approval.   This Contract is made pursuant to the Resolution of the Board of Directors adopted unanimously at its regular monthly meeting on March 25, 2019.

23.Headings.   The headings of the sections of this Agreement have been included for convenience of reference only and shall in no way restrict or modify any of the terms or provisions thereof.

IN WITNESS WHEREOF, the parties have executed this Agreement as of the date first above mentioned. 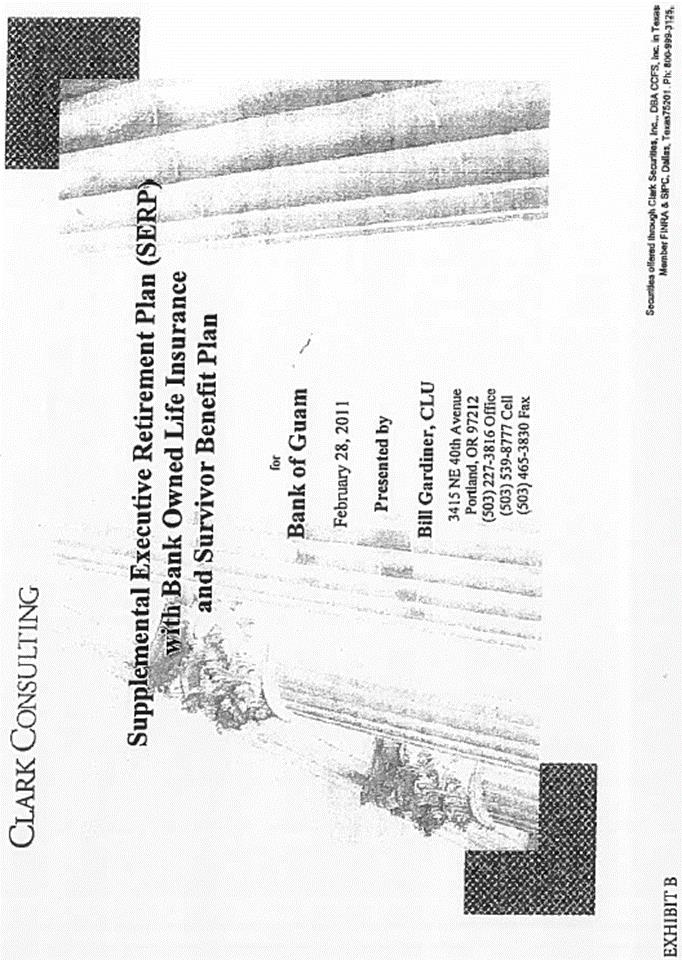 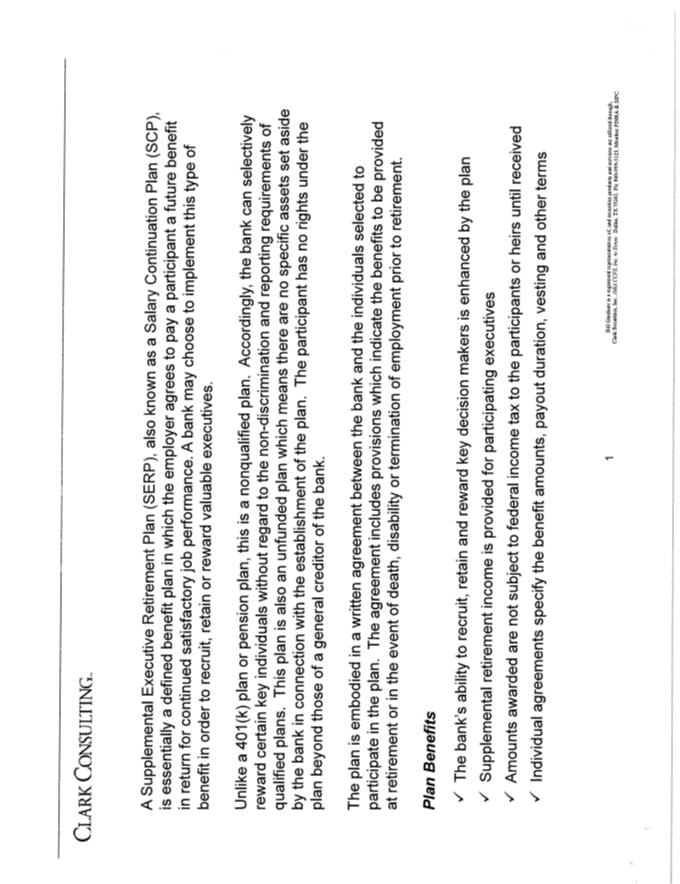 Clark consulting a supplemental retirement plan (serp), also known as salary continuation plan (scp), is essentailly a defined benefit plan in which the employer agrees to pay a participant a future benefit in return for continued satisfactory job performance. A bank may choose to implment this type of benefit in order to recruit, retain or reward valuable executives. Unlike a 401(k) plan or pension plan, this is a nonqualified plan. Accordingly, the bank can selectively reward certain key individuals without regard to the non-discrimination and reporting requirements of qualifed plans. This plan is also an unfunded plan which mean sthere are no specific assets set aside by the bank in connection with the establishment of the plan. The participant has no rights under the plan beyond those of a general creditor of the bank. The plan is embodied in a written agreement between the bank and the indiduals selected to participate in the plan. The agreement includes provisions which indicate the benefits to be provided at retirement or in the event of death, disability or termination of employment prior to retirement. Plan benefits the banks ability to recruit, retain and reward key decision makers is enhanced by the plan supplmental retirement income is pprovided for participating executives amounts awarded are not subject to federal income tax to the participants or heirs until received individual agreements specif the benefit amounts, payout duratiion, vesting and other terms bill gariner is a registered representatives of, and securities products and services are offered through clark securities inc. dbi ccfs inc. in texas. Dallas, tx 75201. Ph: 800 ###-###-#### member finra & sipc.