THIS FIRST AMENDMENT TO LEASE (the “Agreement”) is entered into as of this 27th day of February, 2020 (the “Effective Date”) by and between SCIENCE PARK DEVELOPMENT CORPORATION, a Connecticut non stock corporation having its office at 5 Science Park, New Haven, Connecticut 06511 (the “Landlord”), and ARVINAS OPERATIONS, INC., f/k/a Arvinas, Inc., a Delaware corporation having a principal place of business at 5 Science Park, 3rd Floor, New Haven, Connecticut 06511 (the “Tenant”) in modification of that certain Lease between the Landlord and the Tenant dated as of November 15, 2019 (the “Lease”).

WHEREAS, the Landlord and the Tenant are parties to the Lease which is in full force and effect; and

WHEREAS, the Landlord and the Tenant wish to modify the Lease as more fully set forth herein; and

NOW, THEREFORE, the Landlord and the Tenant agree as follows:

1.Amendments to Lease. As of  the Effective Date, the following modifications are made to the Lease:

During the initial Term, other than with respect to the Initial Rent Prepayment and subject to adjustment, if applicable, as provided in Section of 1.1(a) of this Lease, Tenant shall pay to Landlord a base rent (“Base Rent”) for each month of each Lease Year as follows:

2.Schedules. Schedule A attached hereto, is substituted for and shall supersede and replace the existing Schedule A to the Lease.

3.Reaffirmation of Lease. In all other respects, the Lease, as hereby amended, is reaffirmed by the Parties and shall be and remain in full force and effect.

4.Landlord and Tenant Remain Obligated.  Nothing  herein  shall constitute a waiver or release by the Landlord or the Tenant of any unperformed obligations of the other under the Lease as modified by this Agreement.

7.Capitalized Terms. Capitalized terms used but not otherwise defined herein shall have the same meaning as set forth in the Lease.

8.Entire Agreement.  This Agreement sets forth the entire   agreement between the parties with respect to the matters set forth herein. There have been no additional oral or written representations or agreements.

Dated as of the date and year first above written.

On this date personally appeared before me, Sean Cassidy, who acknowledged himself to be the duly authorized Treasurer and Chief Financial Officer of Arvinas Operations, Inc., a Delaware corporation, and that the execution hereof was the free act and deed of such corporation and his/her free act and deed as such officer.

IN WITNESS WHEREOF, I hereunto set my hand.

On this date personally appeared before me, Clio Nicolakis, who acknowledged herself to be the duly authorized Executive Director and Controller of Science Park Development Corporation, a Connecticut non stock corporation, and that the execution hereof was the free act and deed of such corporation and her free act and deed as such officer.

IN WITNESS WHEREOF, I hereunto set my hand.

FLOOR PLAN OF THE LEASED PREMISES (4th Floor of Building 4) 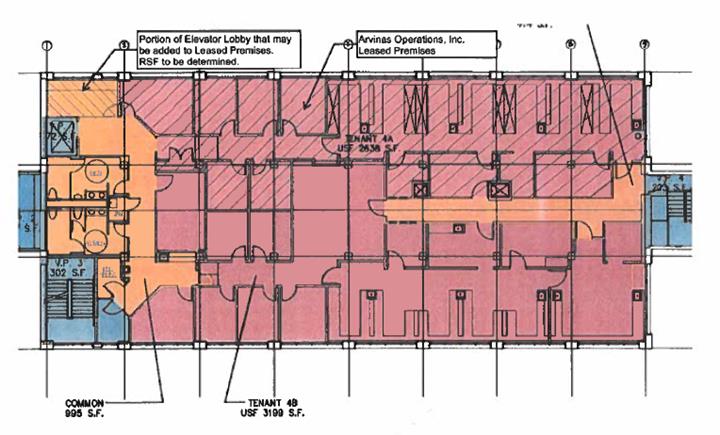